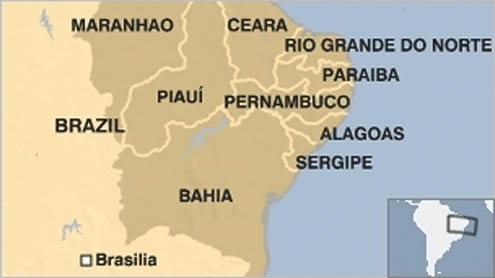 A major power cut in Brazil has left nine states in the dark for nearly three hours.

All the state capitals in the north-east of the country were hit by the blackout, including four cities that will be hosting the 2014 World Cup.More than two-and-a-half hours later power was restored to the state capitals, but smaller cities remained without electricity for longer.Tens of millions of people across the region were affected.The government said a fire in Piaui state had caused several transmission lines to go down.

The mines and energy minister, Edson Lobao, said this led to the entire north-eastern region being disconnected from the national grid.The cause of the fire is unknown.A spokesman for the country’s electricity regulator Aneel, reportedly said that officials had focused on restoring power before trying to determine what caused the blaze.The states affected were Pernambuco, Bahia, Rio Grande do Norte, Piaui, Alagoas, Ceara, Paraiba, Sergipe and Maranhao.Power cuts in Brazil are less frequent than in the past, but still happen a few times a year, particularly in the north-east.Two major power cuts hit the region in 2012 despite recent improvements in energy infrastructure. – BBC