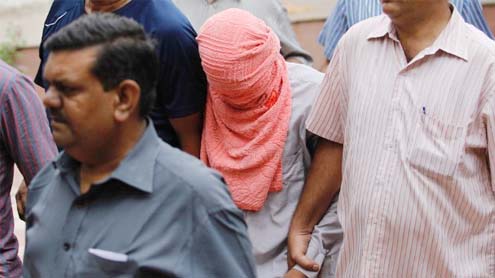 New Delhi: Protesters in the street outside the court raised their fists and shouted, “We want justice!” If the teenager was old enough to commit the crime, they said, then he is old enough to have been tried as an adult and face the death penalty.

The victim’s parents attended the trial and said they plan to appeal.”We want him to be hanged,” the victim’s visibly upset mother told reporters. “I am not at all happy with this verdict. By not punishing this teenager, this verdict is encouraging other teenagers to indulge in such acts and does not provide any safety to girls.”The teenager is the first of five suspects to be tried for their role in the attack, which happened December 16 on a moving bus in New Delhi. The group assaulted the 23-year-old woman and her male companion, robbing them and then dumping them at the side of the road, police said.

While the man was eventually discharged from the hospital, the woman was so badly hurt that she had to be airlifted to a hospital in Singapore in “extremely critical condition,” doctors there said. She died two weeks later.The man said he and the young woman watched a movie before boarding a private bus to return to her home in a New Delhi suburb.The bus driver made lewd remarks and five other men taunted the couple and locked the doors, the man told Agence France-Press in January.

“They hit me with a small stick and dragged my friend to a seat near the driver’s cabin,” the man said. Then the “driver and the other men raped my friend and hit her in the worst possible ways in the most private parts of her body.”The driver used an iron bar in the attack, he told the news agency. The friend said he suffered a broken leg.”The cruelty I saw should not be seen ever. I tried to fight against the men but later I begged them again and again to leave her,” he said.

In an interview with Reuters, the man said the abductors drove the couple throughout the city for about two hours before dropping them below an overpass; he was unable to stand and had no clothes.”Three-wheeler taxis would slow down, take a look at us and move on,” he said. “So would cars and motorcycles. We got no help for nearly 20 or 25 minutes.”When three police vehicles finally did show up, he said, “they couldn’t decide among themselves which police precinct has jurisdiction.”His friend bled profusely throughout the ordeal, he said.

Despite the outrage over the attack, the problem of sexual violence in India persists.An American woman was raped in June after visiting a popular Hindu temple in northern India. After failing to find a taxi to take her back to her hotel, she accepted a ride from three men who took her to a wooded area, then raped and robbed her, authorities said.A 4-year-old girl died after being sexually assaulted by a 35-year-old man in Ghansaur in April, and a 5-year-old girl was allegedly raped two weeks earlier in New Delhi. Two men were arrested in that case.

A Swiss woman and her husband who were on a cycling tour across the India were attacked by a group of men in March after they set up camp near a forest in the central part of the country. The men beat the husband and raped the wife, police said.Last week, a 23-year-old female photographer was allegedly gang-raped in Mumbai by five men, the police chief there said.The woman was on assignment with a male colleague when some men approached them, took them to a nearby mill under false pretenses, then tied them both up and raped her, Mumbai police commissioner Satypal Singh said.

The woman was in stable condition after the attack.An Indian court Saturday convicted a teenage boy for his part in the gang rape last December of a medical student who later died of her injuries, sentencing him to three years in prison.The sentence drew immediate protests outside the court and from the victim’s family, who feel it is too lenient for a crime that shocked the city and prompted a nationwide debate over the treatment of women and the handling of sexual assaults.The teenager was convicted of murder, rape and robbery. His trial was in juvenile court because he was 17 at the time of the crime, and the three-year sentence is the maximum allowed under the court’s rules. – CNN