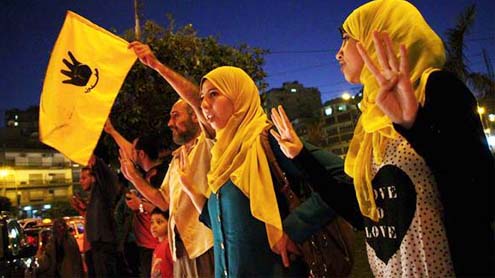 The decision was part of a limited reshuffle in the ministry in charge of security. The minister also replaced the heads of the security and investigative bureaus in the southern governorate of Minya, where there have been attacks on government buildings and churches during weeks of unrest.A security official said Minister Mohammed Ibrahim removed the head of the prison authority Mostafa Baz, who had been in the post since June 10.The official said there was no official explanation for the removal. He said the decision comes after reports that Baz had overlooked meetings in jail between Muslim Brotherhood leaders and other Islamists, and allowed them to communicate with people outside the prisons.

The official spoke on condition of anonymity because he was not authorized to brief the media Authorities accuse the Brotherhood of organizing a campaign to destabilize Egypt. Security officials have arrested hundreds of the group’s members in the wake of the July 3 military coup that toppled Islamist President Muhammad Mursi.In an interview with a private television station this week, Baz denied he facilitated meetings between the leadership. He said reports in the media were referring to when several leaders of the group and other Islamists prayed together.

Baz said police officers outnumbered the Islamists at the prayer in an attempt to show that they were monitored.“There were no meetings. They each dispersed and went to their cells,” he told ONTV. He said the prayer brought together the Brotherhood’s supreme leader, Mohammed Badie, and other senior figures held in the same prison in southern Cairo.Baz said he strictly followed prison regulations, dismissing reports that the leaders are allowed contacts with the outside world, apparently through mobile phones smuggled to the prison.

A report Monday in the daily Al-Masry Al-Youm quoted prison officials saying regulations have been relaxed, allowing a Brotherhood member to lead the prayer, instead of a designated preacher from the prison authority. The report also said free time has been extended for the Brotherhood detainees, held pending various cases, which could undermine investigation.

Ibrahim, the interior minister, told the paper he was investigating the incidents.The Brotherhood leaders who were involved in the prayer meeting are held in high security prisons. Families of some of the detainees said they have been only allowed limited access to them. Others have complained of “inhumane conditions” of detention.The new head of prison authorities, Mohammed Rateb, previously was head of internal affairs.Meanwhile Wednesday, Egypt’s state-run MENA news agency reported that a police officer was killed and three conscripts wounded when gunmen opened fire at a checkpoint in a village in the southern Aswan governorate. – ArabNews

Sri Lanka hits back at U.N. rights chief after visit