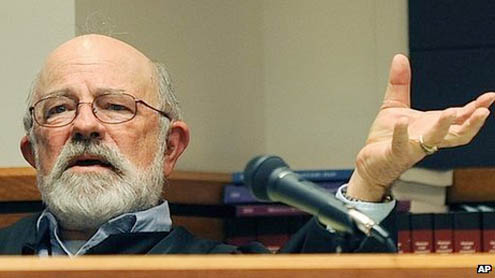 A judge in the US state of Montana who admitted he had been too lenient when sentencing a man for rape has been told he cannot modify the punishment.

There was an outcry after Judge Todd Baugh handed down a month in jail to a former teacher for raping a 14-year-old student, who later killed herself.As anger about the case mounted, Judge Baugh scheduled a hearing to review his sentencing for Stacey Rambold.But on Friday Montana’s Supreme Court ruled he lacked the authority to do so.It was not just Rambold’s 30-day prison term that prompted outrage. Judge Baugh’s comments about the victim during last month’s sentencing hearing also upset many.

He said the girl had been “as much in control of the situation” as her rapist, and that she was “older than her chronological age”. The judge later said his comments were “stupid and wrong”, but has resisted pressure to resign.Montana’s Supreme Court issued an order to halt Judge Baugh’s hearing less than an hour before it was due to begin.The state attorney general’s office had lodged an emergency petition to prevent the hearing from taking place.”We conclude that the stated intent of the District Court to alter the initially imposed oral sentence in today’s scheduled hearing is unlawful,” wrote the justices in their opinion.

They ruled that Rambold’s sentence could only be changed on an appeal, which was launched by state prosecutors this week.Judge Baugh, 71, appeared in his courtroom shortly after Friday’s hearing was originally scheduled to begin and told reporters he had already decided to cancel it.He also argued that prosecutors had not raised objections to his sentence until afterwards, when they realised the mandatory minimum term for sexual intercourse without consent was two years.

Rambold’s attorney, Jay Lansing, said in a court filing this week that a new sentence would only create “confusion and uncertainty for all parties”.Rambold, now 54, was charged in 2008 with three counts of sexual intercourse with a girl beneath the age of consent.His victim, Cherice Moralez, was a student at the high school where he taught in the city of Billings, Montana.Her mother blames her daughter’s 2010 suicide on the distress caused by the assault and its aftermath. She has pilloried the judge. – BBC