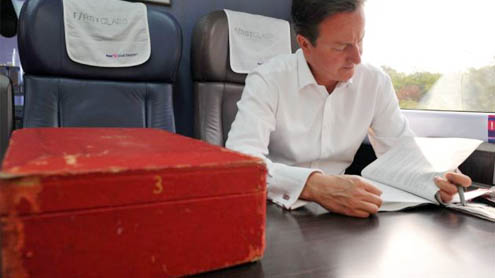 David Cameron was left red-faced after apparently leaving his ministerial red box unattended on a train – with the key still in its lock.

He had been using the distinctive briefcase, bearing his title of ‘Prime Minister’, to carry official papers as he travelled to a wedding in Yorkshire.It was photographed by a fellow passenger, seemingly unattended on a table, after Mr Cameron wandered to another part of the train.Downing Street insisted that claims of a security breach were ‘nonsense’, and that a member of Mr Cameron’s police protection team was keeping watch at all times.But the passenger told the Daily Mirror: ‘It was just sitting there. I could probably have run off with it if I’d wanted to.‘I could quite easily have damaged it or scratched it … and above all I couldn’t believe the key was in the lock.’

A No. 10 spokesman insisted that the box ‘was not left unattended’, adding that ‘the Prime Minister’s security detail was there at all times’.Mr Cameron was, however, said to have been ‘distraught’ when he realised what had happened.A member of Mr Cameron’s entourage is thought to have been sat across the aisle from the table in question, keeping tabs on the box while the Prime Minister was away.Nevertheless, the incident is highly embarrassing for Mr Cameron. Ministers – let alone Prime Ministers – are advised against working on their official papers while using public transport.

In 1999, Labour minister Peter Kilfoyle issued guidance that the boxes, which often contain state secrets, should be ‘effectively disguised’ if carried on the transport network.As a result, government cars can drive thousands of miles carrying only the boxes when ministers decide to take public transport, or cycle.Former deputy prime minister Lord Prescott said: ‘I’m staggered that a prime minister should be so slack about looking after government secrets.

‘The box could have contained detailed confidential intelligence about Syria. I never let mine out of my sight.’The red box was photographed on Saturday as Mr Cameron – having recently returned from the G20 summit in Russia – took a train from King’s Cross in north London to York, to attend his sister-in-law’s wedding.The apparent gaffe would not be the first time that Mr Cameron has left something unattended.

He famously drove off and left his daughter Nancy, now nine, in a pub after a Sunday lunch last June.Attempts to secure red boxes have not been without controversy, however.The Transport Minister, Simon Burns, was widely criticised when he claimed that he needed a chauffeur because official rules barred him from working on confidential papers while taking public trains. – DailyMail