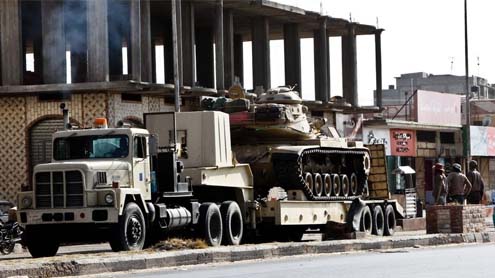 Egyptian troops and tanks backed by helicopter gunships swept through villages in the northern Sinai Peninsula near the border with the Palestinian Gaza Strip on Monday, the third day of a major offensive against Islamic extremists, a military official said. So far, some 20 suspected militants have been killed and 20 captured in the operation, he added.

Explosions rocked El Mahdiya and Naga Shabana, two of several villages south of the town of Rafah, the official said, where the military hit targets and shelters used by militants wanted for the killing and abduction of Egyptian soldiers over the past year.A day earlier, an Al Qaeda-inspired militant group based in the area claimed responsibility for last week’s failed assassination attempt on Egypt’s interior minister, describing the Cairo attack as a “suicide” car bomb.

The claim could not be independently verified but it appeared on militant websites that regularly distribute statements from Al Qaeda-linked groups. If true, it would mark the first time Sinai militants took their fight to the heart of the Egyptian capital with a suicide attack.

Tourist resorts along the southern coast of the rocky, desert region saw a string of suicide bombings in the mid-2000s that left at least 125 people dead and triggered mass arrests and detentions of thousands of Bedouin tribesman. The crackdown soured relations between locals and the central government, intensifying the Bedouins’ feelings of mistreatment and turning the northern end of the peninsula into an incubator for Islamic extremism.Like Ansar Jerusalem, other Sinai-based Al Qaeda inspired groups have been blamed for a spike of attacks against military and police in northern Sinai since the military ousted former President Mohammed Mursi on July 3.

The increase in violence has raised suspicions of links between Mursi’s Muslim Brotherhood and Islamic militant groups. Military officials have accused Mursi of handling the groups too leniently and striking a truce with them to halt their attacks in return for suspending military operations against them during his year in office. This truce, they say, gave militants free reign to stockpile weapons, evidenced by the large caches of anti-aircraft missiles, mortars, and RPGs and other weapons seized by the army since Saturday.

Mustafa Hegazy, the interim president’s political adviser, told Egyptian TV station Al-Hayat that under Mursi’s rule, the number of militants in Sinai jumped to 7,000 or more from 1,000.“It is graver than what we thought,” he said in a late Sunday interview. He said the attempt on the interior minister did not signal a broader deterioration of Egypt’s security, which was being “restored” across the country.The army however has targeted it along with several other Islamic militant groups in its current operation.

In northern Sinai, mobile phone networks, landlines and the Internet were down early Monday as the military resumed its strikes on alleged militant hideouts in the southern town of Rafah, according to the military official, who spoke on condition of anonymity because he was not authorized to speak to the press.Besides those killed and captured in the operation, a number of suspects have fled to coastal villages or tried to enter Gaza through underground tunnels.

Witnesses said that they saw soldiers leaving troop carriers and firing in the air in celebration at sunset as they returned from the town of Rafah to their base in the city of El Arish. Behind them, columns of smoke rose in the sky from where strikes were concentrated just south of Rafah, they added.In the area lies the village of El Mahdiya, believed to be the home of militant leader Shadi el-Manaei, a suspected mastermind of the abduction of seven Egyptian soldiers in May.An official said the military seized weapons and ammunition there. There was no report on causalities or arrests.

On Monday, fear of new attacks in Cairo prompted authorities to beef up security, especially in stations and trains of the subway network, where men guards patrolled with sniffer dogs and searched passengers. Millions of commuters use the subway daily.On Saturday, three mortar rounds were removed from railway tracks in the eastern city of Suez. Passenger trains in Egypt have been stopped since August 14. – ArabNews