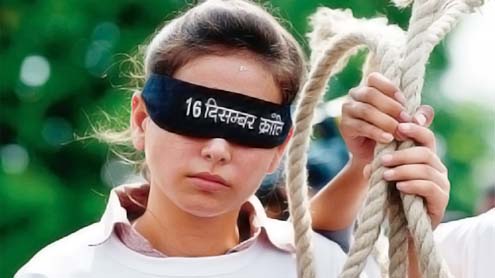 An Indian court will on Wednesday consider the sentence for four men found guilty of the brutal gang rape and murder of an Indian student on a bus, as the victim’s family leads calls for them to be hanged.

A day after he handed down his verdicts over a crime that sickened India, Judge Yogesh Khanna will consider arguments from prosecution and defence counsels over the severity of the punishment.The 23-year-old victim’s parents have insisted the four must be executed for what the judge branded the “cold-blooded murder” of their daughter last December.Khanna is also under political pressure to order the death sentence in a country where capital punishment is applied in “the rarest of rare” cases.

However, defence lawyers, who have already announced plans to appeal Tuesday’s verdict, are set to argue that the death sentence is not warranted.A lawyer for one of the men, Mukesh Singh, said the defence team was “well prepared” to counter the prosecution’s calls for the death sentence.“In a case where there is a call for the death penalty, then we will argue for an easing of the punishment,” V.K. Anand said.

Lawyers for the three other men — Akshay Thakur, Pawan Gupta and Vinay Sharma – will also put forward their arguments before the judge at the same courtroom in south Delhi where they were found guilty on Tuesday.Vivek Sharma, who is representing Gupta, said the judge should decide in a matter of days, possibly as early as Wednesday.“If all arguments wrap up tomorrow, then the judge may announce the sentence. If not, it could easily come the day after,” he said.The judge convicted the men on charges including gang rape, murder and theft, in a case that brought simmering public anger over sexual violence to the boil.

The parents of the victim, who were in court to hear the verdict, have yet to react since the announcement.But speaking to AFP from their home in Delhi last week, her father reiterated his calls that they should hang.“We will not accept anything below the death penalty,” said the father, who cannot be named to protect the identity of his late daughter.“Anything other than the gallows for these men will not be right. It would send out the wrong message, people will lose trust in our judicial system.”

Protesters gathered outside the court on Tuesday to demand the four be hanged, some wearing makeshift nooses.The government, stung by the mass protests that followed the attack, has introduced tough new anti-rape laws which include provisions for some sex attackers to be executed even if a victim survives.One of the leaders of the main opposition Bharatiya Janata Party (BJP) said the execution of the four would send out a clear signal of India’s determination to tackle violence against women.

“If they are awarded the death sentence, it would become a model for the country and effectively curb incidents of rapes,” she was quoted as saying by the Press Trust of India news agency.There was outrage last month when a juvenile who was also convicted of taking part in the attack was sentenced to three years to a remedial home — the maximum punishment allowed by law.A fifth adult defendant, bus driver Ram Singh, was found hanging in his prison cell in March while awaiting trial.

The seven-month trial featured DNA evidence linking the four to the crime scene, statements from a male companion who was beaten up during the attack, as well as the victim’s dying testimony.The victim and her male friend had spent the evening at the movies when they were picked up by a bus.But rather than take them home, the group subjected the pair to a horrifying 45-minute ordeal before throwing them out of the bus, virtually unconscious and naked. – KahleejNews