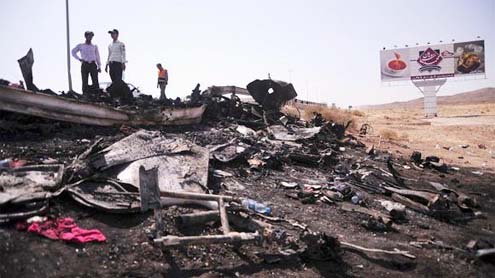 TEHRAN: A collision between two buses in Iran killed 44 people and injured 39 others, the ISNA news agency reported on Tuesday, in the country’s most serious road accident in years.

The accident took place late on Monday along the highway between Qom and Tehran. “The driver of a bus traveling from Isfahan lost control of his vehicle after one of his tires burst. He hit a car before finding himself in the oncoming lane, where he hit another bus. The two vehicles caught fire immediately,” said Col. Ardeshir Jamshidi-rad, the head of traffic police in the province of Qom.

Iran’s roads were among the most dangerous in the world a few years ago. In the 1990s, there were around 28,000 deaths per year for the country’s four million cars. During the past two years, the number of road deaths has dropped to around 20,000 every year as the number of cars on the roads has risen to 17 million. – ArabNews