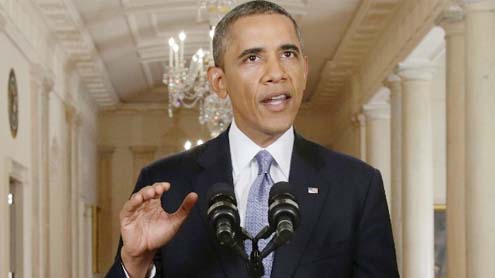 Washington: However, Monday’s unexpected diplomatic overture by Russia changed the strategic and political equation. Under the Russian plan, which still lacks any details, Syria would turn over its chemical weapons stockpiles to international control.

That would meet Obama’s main criterion of ending the chemical weapons threat by the al-Assad regime.However, Russia canceled a U.N. Security Council meeting it had called for Tuesday and rejected an initial proposal by France for the framework of a resolution, raising questions about whether the diplomatic effort was serious or a stall tactic to put off a U.S. attack on Syria.For Obama, the Russian proposal prompted by a seemingly off-the-cuff comment by U.S. Secretary of State John Kerry further muddied an already complex challenge in Syria compounded by public concerns of another possible military quagmire.

The president called the Russian offer an encouraging sign, but warned that “it’s too early to tell whether this offer will succeed, and any agreement must verify that the Assad regime keeps its commitments.”Therefore, he said, he asked Congress to postpone a vote for now on authorizing military force against Syria.In addition, the diplomatic push will provide more time for United Nations inspectors to report their findings on the August attack and allow his administration to continue rallying support for an international response, the president said.At the same time, Obama said he ordered the U.S. military to maintain its “current posture to keep the pressure on Assad and to be in a position to respond if diplomacy fails.”

Kerry made the same argument at a congressional hearing Tuesday, telling legislators that “nothing focuses the mind like the prospect of a hanging.”However, congressional support for military action reflected public opposition. A CNN/ORC International poll released Monday said 59% of respondents opposed congressional authorization of military action, while 72% said American strikes would achieve no significant goals.In an instant poll of people who watched the speech Tuesday night, 61% favored Obama’s approach compared to 37% who opposed it.

The CNN/ORC International survey showed almost two-thirds of respondents thought the Syria situation would be resolved through diplomatic efforts, while 47% said Obama made a convincing case for military action compared to 50% who said he didn’t.By CNN’s best estimate, the sample of poll respondents — 37% Democrats, 20% Republicans and 43% independents — was about seven percentage points more Democratic than the general public.Critics call the situation faced by Obama his own doing for a confused Syria policy that he has never fully explained.”There’s a degree of incoherence that I have never seen the likes of,” veteran Republican Sen. John McCain of Arizona told CNN on Tuesday.

In the most emotional part of the speech, Obama cited the videos his administration made public that showed victims of the Syrian sarin gas attack.”The images from this massacre are sickening: men, women, children lying in rows, killed by poison gas, others foaming at the mouth, gasping for breath, a father clutching his dead children, imploring them to get up and walk,” the president said in emphasizing the horror of chemical weapons.”The question now is what the United States of America and the international community is prepared to do about it, because what happened to those people — to those children — is not only a violation of international law, it’s also a danger to our security,” Obama added.

Directly addressing questions he received from members of Congress and letters from the public, the president insisted that any U.S. military strike would be limited in scope and mission.”I know that after the terrible toll of Iraq and Afghanistan, the idea of any military action — no matter how limited — is not going to be popular,” he said, later declaring: “I will not put American boots on the ground in Syria. I will not pursue an open-ended action like Iraq or Afghanistan. I will not pursue a prolonged air campaign like Libya or Kosovo. This would be a targeted strike to achieve a clear objective, deterring the use of chemical weapons and degrading Assad’s capabilities.”

At the same time, he rejected criticism that such a limited military response would prove meaningless, saying “the United States military doesn’t do pin pricks.””Even a limited strike will send a message to Assad that no other nation can deliver,” Obama said. “I don’t think we should remove another dictator with force. We learned from Iraq that doing so makes us responsible for all that comes next. But a targeted strike can makes Assad — or any other dictator — think twice before using chemical weapons.”He described the U.S. role in the world as “doing more than forging international agreements; it has meant enforcing them.”

“The burdens of leadership are often heavy, but the world’s a better place because we have borne them,” Obama said before making a direct appeal to both sides of the political spectrum.”To my friends on the right, I ask you to reconcile your commitment to America’s military might with the failure to act when a cause is so plainly just,” he said. “To my friends on the left, I ask you to reconcile your belief in freedom and dignity for all people with those images of children writhing in pain and going still on a cold hospital floor, for sometimes resolutions and statements of condemnation are simply not enough.”

He concluded by challenging “every member of Congress and those of you watching at home tonight to view those videos of the attack, and then ask what kind of world will we live in if the United States of America sees a dictator brazenly violate international law with poison gas and we choose to look the other way?”McCain and fellow GOP Sen. Lindsey Graham of South Carolina responded by saying Obama failed to speak forcefully enough “about the need to increase our military assistance to moderate opposition forces in Syria, such as the Free Syrian Army.”

They called for the United States and its allies on the U.N. Security Council to “immediately” offer a resolution “that lays out what steps Syria would have to take to give up its chemical weapons, including making a full and accurate declaration of all of its chemical weapons and granting international monitors unfettered access to all sites in Syria that possess these weapons.””This resolution would have to threaten serious consequences if the Assad regime does not comply,” they said, calling for an up-or-down vote by the Security Council, where Syrian allies Russia and China have so far blocked any U.N. action against Syria.

Rep. Elijah Cummings, a Maryland Democrat and staunch Obama supporter who is undecided on Syria, praised him for “a very good job” but said his position on the issue remained unchanged.”It was not a wasted speech,” said Cummings, noting his constituents are tired of war. “I thought he made a great moral argument.”For two years, Obama resisted calls by conservative hawks such McCain to back rebels fighting the al-Assad regime, saying the United States sought no role in the Syrian civil war.When evidence of chemical weapons use emerged earlier this year, and Hezbollah fighters from Lebanon helped al-Assad’s forces gain the upper hand, Obama agreed in June to provide military aid to the rebels.

The August attack clearly crossed a “red line” he declared earlier against chemical weapons use, prompting his decision for what he hoped would be an international military response against Syria.However, Britain’s Parliament voted against joining a military response, denying Obama a normally reliable ally. He then decided to seek authorization from Congress to provide political cover and buy time to build a broader international coalition.

Now legislators from both parties are threatening to oppose a resolution authorizing a military response, and Obama has asked for time to let the diplomatic process play out.Kerry heads to Geneva on Thursday for talks with his Russian counterpart, who first offered his government’s proposal Monday after Kerry earlier said Syria’s turning over its chemical weapons was the only way to avoid a U.S. attack.Syria agreed Tuesday to the Russian proposal, with Foreign Minister Walid Moallem saying his government was ready to disclose the location of its chemical weapons, halt production, and show its facilities to representatives of Russia, the United Nations, and other unspecified states.

At the same time, Russian President Vladimir Putin said Tuesday that “all of this will only mean anything if the United States and other nations supporting it tell us that they’re giving up their plan to use force against Syria.””You can’t really ask Syria, or any other country, to disarm unilaterally while military action against it is being contemplated,” Putin said in an interview with a Russian television network.For his part, Obama sought to persuade Americans of the opposite — that the diplomatic stirrings by Russia and Syria occurred because of the credible threat of a military attack intended to deter Syria from using its chemical weapons again.

The president has not said whether he would launch strikes without the support of Congress.Meanwhile, a bipartisan group of eight senators is working on an alternative resolution to the one authorizing military action already passed by the Senate Foreign Relations Committee. It would include “guidelines, reporting process and benchmarks that have to be met,” McCain told CNN.On the House side, Democratic Rep. Chris Van Hollen of Maryland said he was working on a version of a resolution that would authorize a military response if the diplomatic process failed to yield an acceptable result in 30 days.

The Obama administration has launched a sweeping lobbying effort, with the president meeting on Capitol Hill on Tuesday with senators from both parties as part of a series of classified briefings, hearings and other consultations on the Syria issue.Since Friday, the administration has spoken with at least 93 senators and more than 350 members of the House, a White House official said Tuesday.Despite such outreach, indications were that the congressional push wasn’t working.

Sen. Mitch McConnell, the top-ranking Republican in the Senate, announced Tuesday he will vote against authorizing military action on Syria.So did Democratic Sen. Ed Markey of Massachusetts, who won the seat vacated by Kerry when he became secretary of state.A running CNN vote count showed most members of Congress remained undecided, with significant opposition in both chambers among the much smaller numbers who have announced their decision leaving the outcome in doubt.President Barack Obama tried Tuesday to sell a military intervention he never wanted to an American public that opposes it, telling the nation that he needed authorization to attack Syria as leverage in a newly emerged diplomatic opening from Russia.

Calling the United States “the anchor of global security,” Obama offered moral, political and strategic arguments for being ready to launch limited military strikes while trying to negotiate a diplomatic solution to what he called Syria’s violation of a global ban on chemical weapons.”Our ideals and principles, as well as our national security, are at stake in Syria, along with our leadership of a world where we seek to ensure that the worst weapons will never be used,” Obama said in making the case that the United States must act when dictators such as Syrian President Bashar al-Assad “brazenly” violate international treaties intended to protect humanity.

The 15-minute nationally televised speech initially was planned as Obama’s final push to win support from a skeptical public and Congress for his planned attack on Syria for what his administration calls a major chemical weapons attack on August 21 that killed more than 1,400 people in suburban Damascus. – CNN