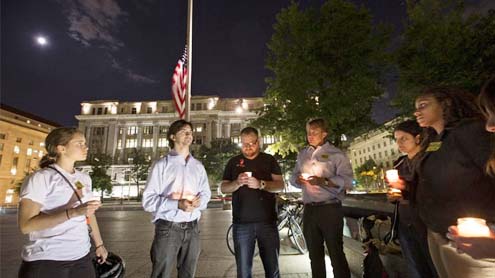 WASHINGTON: The FBI is asking the public for help in determining why a former Navy reservist opened fire early Monday at the Washington Navy Yard, killing at least 12 people before he was shot dead by police.

The suspected gunman was identified by the FBI as Aaron Alexis, a 34-year-old civilian contractor from Queens, N.Y., who most recently resided in Fort Worth, Texas. The FBI asked the public to contact the bureau with any tips related to the shooter.”This investigation is still very active,” Valerie Parlave, the FBI’s assistant director-in-charge, said at a news conference. “No piece of information is too small.”According to a bio released by the U.S. Navy, Alexis was a full-time reservist from 2007 to 2011. He left the Navy on Jan. 31, 2011, as a petty officer 3rd class and had been working for the fleet logistics support squadron No. 46 in Fort Worth.

Washington Mayor Vincent Gray said Alexis was shot during a gun battle with officers.Alexis was arrested in Fort Worth in 2010 for discharging a firearm in city limits, police records show. Alexis told police he had fired the gun accidentally when he was cleaning it, according to a police report filed with the Tarrant County Criminal District Attorney’s Office. Charges were never filed.Alexis was also arrested in Seattle in 2004, according to the Seattle Police Department, for “shooting out the tires of another man’s vehicle in what Alexis later described as an anger-fueled ‘blackout.'”

A Navy official told Reuters Alexis received a general discharge from the Navy in 2011 “after a series of misconduct issues.”The Navy Yard was placed on lockdown after shots were fired inside a building on the base, the Navy said. A Metro police officer and naval base officer were among those injured in the shooting, according to the D.C. Metro Police.”As far as we know, it’s an isolated incident,” Gray said. “We don’t have any known motive at this juncture.”The mayor said there was “no reason at this stage” to believe it was terrorism, but would not rule it out.

Gray said the victims ranged in age from 46 to 73, and were either civilians or contractors.Authorities were initially seeking two additional suspects based on witness accounts and surveillance footage, but later ruled them out and determined Alexis acted alone.Before a scheduled economic speech at the White House, President Barack Obama deplored “yet another mass shooting” — this one targeting military and civilian personnel.“These are men and women who were going to work, doing their job, protecting all of us,” Obama said. “They’re patriots, and they know the dangers of serving abroad. But today they faced the unimaginable: violence that they wouldn’t have expected here at home.”

“We will do everything in our power to make sure that whoever carried out this cowardly act is held responsible,” the president added. “I want the investigation to be seamless.”Janis Orlowski, chief medical officer at Washington Hospital Center, said one Metropolitan Police officer and two civilians are being treated there. All three arrived in critical condition, Orlowski said, but are expected to make a full recovery.One was shot in the legs, another in the shoulder. Those victims were in surgery, Orlowski said. A woman who was shot in the head and hand would not need surgery because the bullet did not penetrate her skull.

The Navy said shots were fired at the Naval Sea Systems Command Headquarters building on the base at 8:20 a.m., and a “shelter in place” order was issued for Navy Yard personnel.Rick Mason, a program management specialist, told Yahoo News he was on the fourth floor when he saw someone with a gun aiming down into the atrium. The gunman, Mason said, was targeting people who walked into the cafeteria.Other employees described a chaotic scene.

“We heard two shots and started wondering if that was the sound of someone dropping something or if they were really shots,” Omar Grant, a civilian employee at the Navy Yard who was on the first floor of the atrium, said. “We heard three more shots, and that’s when people started running out of the building and getting the hell out of there.”Grant then led a blind colleague to safety.Approximately 3,000 people work in the building, the Navy said, though it’s unclear how many people were inside at the time of the shooting.

The U.S. Senate complex was locked down “in light of the uncertainty surrounding the shooting at the Navy Yard this morning and particularly the possibility of suspects remaining at large,” the Senate said in an alert to staffers. “You may move about the building; however, for the next two hours you may not leave nor can anyone enter the building.”

A White House official said the president had been briefed several times throughout the morning about the unfolding situation at the Navy Yard by assistant to the president for homeland security and counterterrorism Lisa Monaco and deputy chief of staff Alyssa Mastromanaco.A heavy SWAT and police presence could be seen around the Navy Yard. Outside the base, employees sat huddled, crying and holding each other. At least one of the victims was airlifted from the scene, as helicopters circled overhead.

A temporary ground stop was ordered at Reagan National Airport, and schools in the area were placed on temporary lockdown.The 41-acre Navy Yard, located five blocks from Nationals Stadium and a mile and a half from the Capitol, is home to the chief of naval operations and headquarters for the Naval Historical Center and numerous naval commands.The Washington Nationals postponed Monday’s home game against the Atlanta Braves in the wake of the tragedy. The parking lot at the ballpark was used to reunite Navy Yard employees with their family members.According to the Navy’s website, Naval Sea Systems “engineers, builds, buys and maintains the Navy’s ships and submarines and their combat systems.” Approximately 60,000 people work there. – YahooNews