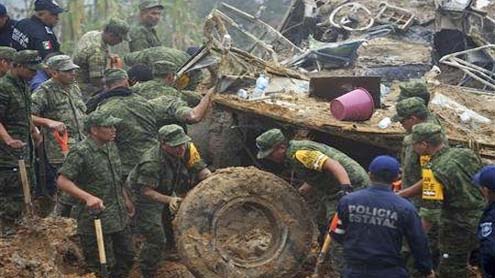 CAPULCO, Mexico: Two powerful storms pummeled Mexico as they converged from the Pacific and the Gulf on Monday, killing at least 42 people and stranding some 40,000 tourists in the Pacific resort of Acapulco amid some of the worst flooding in decades.

Landslides buried homes and a bus in the eastern state of Veracruz, while thousands were evacuated from flooded areas, some by helicopter, and taken to shelters. Residents waded neck deep in brown muddy waters, while some wended down flooded streets in dinghies, pedal boats and on jet skis. Waters churned through streets, converting them into dangerous rapids that swept away cars.State oil monopoly Pemex said it had evacuated three oil platforms and halted drilling at some wells on land due to the storms.

Acapulco Mayor Luis Walton told reporters that 40,000 tourists were stranded in the city.The popular Princess Hotel’s parking lots and golf course were under water, as was much of the city’s plush Diamante district home to top-end hotels.”Tomorrow is another day, and we will just have to check whether or not the highway re-opens,” hotel worker Martila Flores said by telephone. In the resort city alone, at least 21 people were killed as buildings collapsed and roads were transformed into raging rivers, said Constantino Gonzalez, an official with Guerrero state emergency services.

“Unfortunately, the majority of the deaths have occurred here in Acapulco due to landslides that completely buried homes,” said Gonzalez. The national meteorological service forecast rains would continue through Wednesday.President Enrique Pena Nieto inspected the storm damage in Acapulco and other flooded parts of Guerrero state by air on Monday evening. “We have a plan to arrange for government funds to help,” he told reporters.

Interior Minister Miguel Osorio Chong called the flooding “historic” and said the city of Acapulco had sustained major damage. The resort’s international airport was closed due to power failure, and two major highways were blocked, in the wake of Manuel.”The storms have affected two-thirds of the entire national territory,” Chong said.In Veracruz state, along Mexico’s Gulf coast, 12 people died on Monday after a bus and two nearby homes were buried by a mountain landslide near the town of Xaltepec, Governor Javier Duarte told reporters.

Across the state, 23,000 people were evacuated from their homes and 9,000 remained in emergency shelters, according to a post on Duarte’s Twitter account.Public school classes in Veracruz and Tamaulipas states were canceled for Tuesday. Ingrid, which weakened from a hurricane earlier on Monday, prompted Pemex to evacuate three platforms at its offshore Arenque field, operated by British oil services firm Petrofac, and close 24 wells in its onshore Ebano-Panuco field, a company official said.

On Pemex’s Twitter page, the company said it had activated “emergency procedures” at its Francisco Madero refinery on the Gulf coast of northern Tamaulipas state, but did not provide details. The refinery has a processing capacity of 180,000 barrels per day, including crude from both the Arenque and Panuco fields.Pemex said it was repairing three pipelines damaged by landslides in the state of Puebla.Ingrid maintained maximum winds of 35 miles per hour and was expected to further weaken as it moved overland. The tropical depression continued to dump heavy rains as it churned 6 miles per hour toward the west. – YahooNews

The NHC said isolated areas could see as much as 25 inches of rain, particularly in mountainous terrain, resulting in additional life-threatening flash floods and mud slides. The Mexican government had discontinued all coastal warnings and watches by Monday afternoon.Manuel’s maximum sustained winds stood at 30 mph as it dissipated over west-central Mexico, although heavy rainfall is expected to continue along the country’s southwestern coast. – YahooNews