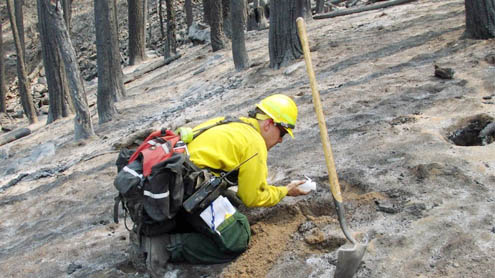 SACRAMENTO, Calif: A fire that raged in forest land in and around Yosemite National Park has left a barren moonscape in the Sierra Nevada mountains that experts say is larger than any burned in centuries.

The fire has consumed about 400 square miles, and within that footprint are a solid 60 square miles that burned so intensely that everything is dead, researchers said.”In other words, it’s nuked,” said Jay Miller, senior wildland fire ecologist with the U.S. Forest Service. “If you asked most of the fire ecologists working in the Sierra Nevada, they would call this unprecedented.”Smaller pockets inside the fire’s footprint also burned hot enough to wipe out trees and other vegetation.

In total, Miller estimates that almost 40 percent of the area inside the fire’s boundary is nothing but charred land. Other areas that burned left trees scarred but alive.Using satellite imagery, Miller created a map of the devastation in the wake of the third-largest wildfire in California history and the largest recorded in the Sierra Nevada.Biologists who have mapped and studied the ages and scarring of trees throughout the mountain range have been able to determine the severity and size of fires that occurred historically.

Miller says a fire has not left such a contiguous moonscape since before the Little Ice Age, which began in 1350.In the decades before humans began controlling fire in forests, the Sierra would burn every 10 to 20 years, clearing understory growth on the ground and opening up clearings for new tree growth. Modern-day practices of fire suppression, combined with cutbacks in forest service budgets and a desire to reduce smoke impacts in the polluted San Joaquin Valley, have combined to create tinderboxes, experts say.

Drought, and dryness associated with a warming climate also have contributed to the intensity of fires this year, researchers say.”If you had a fire every 20 years, you wouldn’t have many like this or you’d never have trees that were 400 years old,” Miller said.Some areas of the Stanislaus National Forest ravaged by the Rim Fire had not burned in 100 years. Most of the land that now resembles a moonscape burned on Aug. 21 and Aug. 22, when the fire jumped to canopies and was spreading the fastest.

In Yosemite National Park, where lightning fires mostly are allowed to burn out naturally and prescribed burns mimic natural conditions, the destruction was much less.The Rim Fire has burned 77,000 acres in wilderness areas in the northeast corner of Yosemite, but only 7 percent of that area was considered high intensity that would result in tree mortality, said Chris Holbeck, a resource biologist for the National Park Service.”It really burned here much like a prescribed fire would to a large degree because of land management practices,” Holbeck said. “Fire plays a natural part of that system. It can’t all be old growth forests, though Yosemite holds some of the oldest trees in the Sierra.”Short-term impacts in the park could include the displacement of a unique and threatened subspecies of great gray owls that makes home in treetops in the fire’s range.

The Rim Fire started Aug. 17, when a hunter’s fire spread, and continues to burn. It is named for a ridge near the location where the fire started — The Rim of the World, an overlook above a gorge carved by the Tuolumne River. The area that burned in 1987 and again in 1996 was filled with chaparral.By the time the Rim Fire ripped through the canyon, it developed its own weather system that pushed it to consume up to 50,000 acres in a day.The satellite was able to map only the parts of the fire where the canopy of trees was destroyed. Other areas burned closer to the ground, so it could take a year to determine whether root systems of trees outside the worst areas of destruction will die as well.

Researchers used satellites to measure the amount of chlorophyll left in canopies to determine which areas will now resemble a charred moonscape.”We look at where the photosynthetic vegetation is killed,” Miller said. “It’s not a measure of the intensity of the fire but a measure of a change in the chlorophyll that is there by and large.”While the landscape has been ravaged, the soil that determines the amount of post-fire erosion that might occur when winter storms hit didn’t suffer as badly as scientists feared.

Severe soil damage occurred on just 7 percent of the land inside the fire’s footprint, said officials with the federal Burned Area Environmental Response team. Fire can destroy soil and make it susceptible to erosion by either burning the fine roots and other organic matter that holds it together, or by burning chaparral that releases oils that create an impervious barrier preventing rainwater from being absorbed. – YahooNews