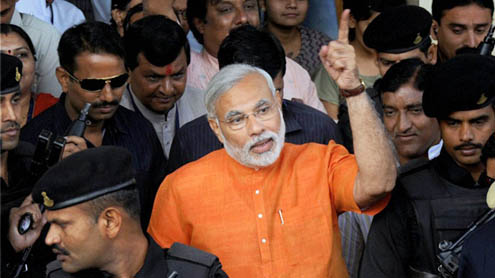 Gujarat Chief Minister Narendra Modi, who enjoys Z-double-plus security, has become the country’s ‘most protected man’ and is all set to get more body-guards.

After the Gujarat police enhanced his security recently, the federal ministry of home affairs is also considering sending more commandos for the Bharatiya Janata Party leader’s protection in view of threat perceptions following his recent anointment as the saffron party’s prime ministerial candidate for the 2014 Lok Sabha (lower house of parliament) polls.

The National Security Guard, whose 108 Black Cat commandos are presently at Narendra Modi’s service, has written to the centre to step up his security as he is likely to travel outside Gujarat more frequently in the run-up to the Lok Sabha ballot-box battle next year.  Additional Chief Secretary (Home) S K Nanda told Khaleej Times that the Gujarat government had also written to the centre to upgrade Modi’s security cover during his election tours outside the state.

“We have written to the centre to upgrade Modi’s security outside the state due to threats during election rallies,” Nanda  added.Only three months ago, his inner security cordon was strengthened from 18 National Security Guard to 36 (108 totally in three shifts), including those who sanitise his vehicles, after intelligence sleuths feared threats from radical outfits even as the 63-year-old politician was made the Bharatiya Janata Party’s poll campaign panel chief.“But we are still short of men and face problems when the chief minister suddenly leaves for New Delhi and other states. So, we have asked for more guards”, said an National Security Guard officer. – KhaleejNews