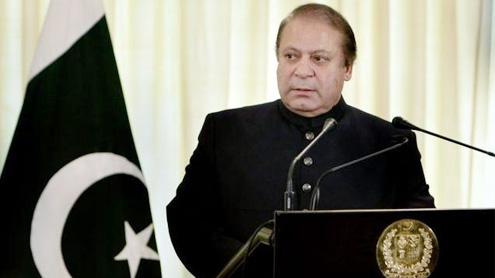 The prime minister, who flew into New York on Monday night, was on his seat as the head of the Pakistan delegation in hall of the 193-member Assembly which began its high-level debate on Tuesday morning. He listened to speeches by some of the world leaders, including US President Barack Obama.“His participation reflects Pakistan’s commitment to multilateral diplomacy and the United Nations being the most representative institution for world peace and security, economic and social development and respect for human rights,” Aizaz Ahmed Chaudhry, a spokesman of the Pakistan delegation, told reporters at a news briefing.

Afterwards, Nawaz Sharif had a meeting with Tunisian President Mohamed Moncef Marzouk. His bilateral interaction with world leaders included talks with the Iranian President, Hasan Rouhani, and Chinese Foreign Minister Wang Yi that focused on forging strong bilateral relations..Later, the prime minister also had an exchange of views with Bill Gates, Co-Chairman and Trustee of Bill and Melinda Gates Foundation.During the meetings on Energy and Sustainable Development, he also interacted with a number of world leaders.

At prime minister’s meeting with Iranian President Hasan Rouhani,both the leaders discussed cooperation in energy sector and reviewed progress on gas pipeline project between the two countries.Asked whether U.S. sanctions on Iran were proving a bottleneck, Aizaz Chaudhry said that those “sanctions do not apply to us.”

On Wednesday, the prime minister is scheduled to meet with the President of the European Council, Herman Van Rompuy, Emir of Qatar Sheikh Tamim Hammad Al Thani, Sri Lankan President Mahinda Rajapaksa, and Gordon Brown, former British prime minister, who is UN Secretary-General’s Special Envoy for Global Education.He will also address summit-level meeting on the anti-poverty Millennium Development Goals, He will round off the day after taking part in a meeting on “Education in Pakistan”, Malala Yousafzai will participate. – APP