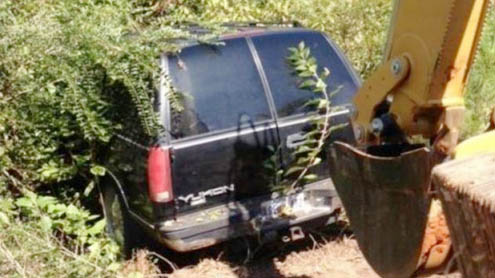 The man, who has not been identified, spotted the car while using the virtual map website to check out terrain where he had previously gone hunting.On the map he saw what looked like an illegal shooting house and so he decided to check it out for himself.He and his son walked up to the exact location, reports wfsb.com. Using coordinates on his GPS, they found the SUV tucked far back in the woods and covered in brush.

According to Sheriff Dean Howell, the GMC Yukon SUV had been reported stolen in March. The victim told investigators it was stolen from outside a convenience store off of Highway 26 West. Howell said there was an old logging road, which the thief or thieves might have used to park the SUV there.‘It looks like the vehicle must have been driven and dumped months ago due to the amount of growth around and under the vehicle,’ Investigator Ben Brown said. The police’s investigation is on-going. – DailyMail