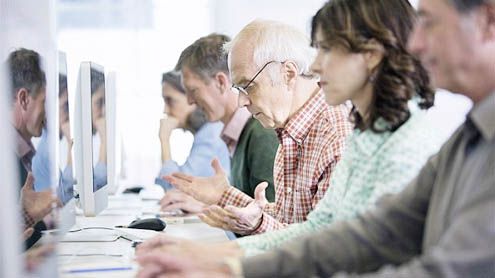 Despite some people feeling like they’re drowning in a sea of status updates, tweets and emails, one in seven American adults don’t use the internet.

A recent study found that 15 per cent of American adults say they don’t surf the internet. Among those who don’t go online, only eight per cent want to – the rest have no desire, according to the Pew Research Center’s Internet and American Life Project.Another nine per cent of respondents said they only use the internet outside of their homes – mostly lower income and less-educated minorities, according to Pew.Among those avoiding internet use, 34 per cent feel ‘the internet is just not relevant to them, and a further 32 per cent feel going online is too difficult, Pew said.

A further 19 per cent said they could not afford the expense of owning a computer or paying for an internet connection, while the remaining seven per cent cited a physical lack of availability or access to the internet, according to Pew.One unsurprising trend is that 44 per cent of Americans aged 65 and older do not use the internet, accounting for almost half of all non-users and likely comprising the eight per cent of those not online saying they were too old to learn.

Despite not using the internet themselves, almost all non-users have some type of interaction with the connected world.A significant number, 44 per cent, of internet avoider have asked a family member or friend to look something up or complete an online task for them, said Pew. A further 23 per cent live in a connected household and 14 per cent once used the internet but gave it up.Not surprisingly, only three per cent of home users connected via dial-up – with 97 per cent having some form of broadband internet access.Conducted from April to May, 2013, an independent pollster contacted 2,252 adults over the age of 18 by phone. Poll questions were asked in both English and Spanish. – DailyMail