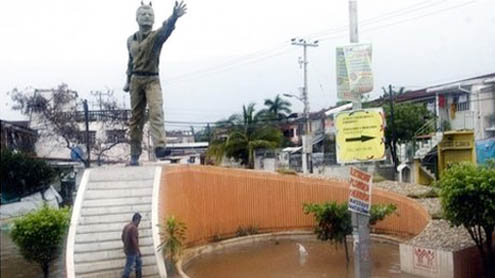 Authorities evacuated people from high-risk areas and closed schools, after flooding reached more than 1m (3ft).Acapulco was one of the areas worst affected by the bad weather, which left thousands of tourists stranded.The government issued renewed alerts for the rest of the state of Guerrero, as further heavy rain was expected.Officials say September, days before its end, is set to break rain records in Mexico by a large margin.Acapulco’s international airport re-opened for commercial flights on Sunday, a week after it had to close due to power cuts and flooding.

But on Thursday, one of the main access roads to the airport had to be closed, officials said.Authorities issued fresh rain alerts, as torrential rains led to evacuations in more than 20 districts.From Mexico City, President Enrique Pena Nieto called on the population to remain alert, as more rain was expected in the next “two or three days.”Mr Pena Nieto spoke after visiting some of the more than 1,200 points set up to collect donations for the thousands of affected Mexicans.

Some 20,000 people are still living in shelters in Guerrero.”We will have to wait for this [the rain] to lessen in some areas so wMore than 50 people are still missing after last week’s storms.President Pena Nieto asked Congress earlier this week to increase the federal budget in light of the emergency.Twenty-four out of Mexico’s 31 states have been affected by the twin storms.Rescue workers continue to search the rubble and mud for bodies of those buried in a landslide in La Pintada, where some 40 homes were swept away by mud from a hillside.

A total of 1.2 million people were affected when Tropical Storm Manuel made landfall on 15 September on Mexico’s south-western coastline.More than 25,000 tourists had to be airlifted out of Acapulco after the beach resort was cut off.Just 24 hours after Manuel had made landfall, Tropical Storm Ingrid hit the country’s Gulf coast, causing destruction in Verazcruz and Tamaulipas.After temporarily weakening, Manuel regained strength and hit Mexico’s north-western coast with hurricane-strength winds and more rain on Thursday.e can regain control over many of these river beds that have flooded,” he told reporters. – BBC