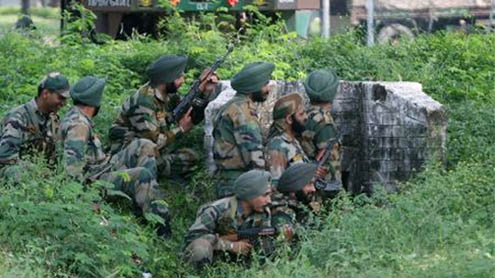 SAMBA: Rebels dressed in Indian army uniforms attacked Indian police and soldiers near the border with Pakistan on Thursday, killing nine people and triggering calls for talks between the prime ministers of the rival nations to be called off.

Just a day before the twin assault in the Indian-held Kashmir (IHK), Indian Prime Minister Manmohan Singh said he would meet his Pakistan counterpart, Nawaz Sharif, on the sidelines of the UN General Assembly on the weekend. The leaders of the nuclear-armed neighbours are expected to discuss rising violence in Kashmir. IHK’s chief minister said the assault was an attempt to derail the talks.

A group of three gunmen attacked a police station in the morning, about 10 km from the border with Pakistan, killing five policemen. They then hijacked a truck and raided an army camp, security forces said. One civilian was killed. The militants killed three soldiers during hours of fighting at the camp, near the town of Samba. While helicopters hovered overhead, a Reuters witness heard sporadic explosions and gunfire as Indian forces closed in on, and eventually killed, the gunmen who were holed up in a building.

New Delhi has accused Pakistan of supporting militants fighting security forces in Indian-held Kashmir since 1989. Militant strikes in IHK, as well as shooting and mortar fire between Indian and Pakistani forces across the border, have risen this year after a decade of falling violence. Some Indian officials fear that a new wave of Pakistan-based militants from groups such as the Lashkar-e-Tayabba will turn to India as Western troops leave Afghanistan next year.

In a separate incident, the Indian army said it had killed at least a dozen militants from a group of 30 it alleged had crossed over from Pakistan into northern Kashmir. Lieutenant General Gurmeet Singh said that operation was still going on. Immediately after the attack in Samba, politicians from India’s nationalist opposition party called for the cancellation of the weekend talks. They will be the first between the two leaders since Nawaz was re-elected in May following an election campaign in which he called for better ties with India.

While Prime Minister Singh strongly condemned what he called a “heinous terrorist attack” he suggested the meeting with Nawaz, expected on Sunday, would go ahead. “This is one more in a series of provocations and barbaric actions by the enemies of peace,” Singh said in a statement. “Such attacks will not deter us and will not succeed in derailing our efforts to find a resolution to all problems through a process of dialogue.” – DailyTimes