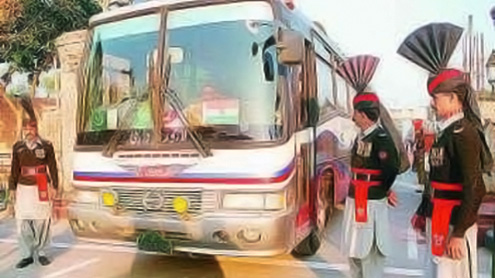 PHAGWARA: The Delhi-Lahore bus was Friday stopped by activists of a little-known outfit in protest against the dual attack in the Indian-held Kashmir, in which 10 persons, including an army officer, were killed.

The Indian bus Sada-e-Sarhad was stopped at the Sugar Mill Chowk on the Delhi-Amritsar National Highway by the activists of Shiv Sena (Hindustan), police said. The police escort accompanying the bus kept the protesters at a distance from the vehicle to ensure safety of the Lahore-bound passengers, police said. The security personnel accompanying the bus as its pilot and escort, joined by local police officers, cordoned off the frightened bus passengers who were not harmed by the protesters.

The protesters, who let the bus pass after a short period, continued disrupting traffic for some time even after the bus had left, they said. They demanded snapping of ties with Pakistan and discontinuation of rail and road services. They also demanded calling off proposed dialogue of Prime Minister Manmohan Singh with his Pakistani counterpart Nawaz Sharif in the US. Police said there was a brief protest by Shiv Sena (H), but the Indo-Pak bus passed after that.

Meanwhile, Pakistan on Friday expressed deep concern over the attack in IHK. In a statement, Foreign Office spokesman Aizaz Ahmed Chaudhry said the timing of this attack is particularly disturbing as it takes place a couple of days before the leaders of Pakistan and India are to meet in a bid to move towards improvement of relations. He said it is imperative that any such act of violence should not be allowed to prevent the two nations from pursuing a path to a better future for their people. Chaudhry said Pakistan, which is itself the foremost victim of this menace, condemns all forms of terrorism and has rendered immense sacrifices in this regard.

“Pakistan remains committed to eliminating the spectre of terrorist violence from our society and our region and has on numerous occasions offered cooperation to India in fighting this menace through laid down bilateral mechanisms,” the FO spokesman said, adding that “Pakistan remains ready to discuss all outstanding disputes in a meaningful manner”. – DailyTimes