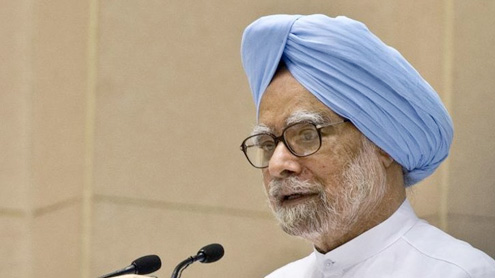 WASHINGTON: Indian Prime Minister Manmohan Singh on Friday toned down expectations for his planned meeting with Prime Minister Nawaz Sharif this weekend at the UN, saying Pakistan remained an “epicentre of terrorism.”

Singh, making what will likely be a farewell visit to the White House after a decade in power, told President Barack Obama that India still faced “difficulties” because of the activities of its neighbour. Singh and Nawaz are expected to hold a meeting on the sidelines of the UN General Assembly in New York on Saturday, as they reach for better relations despite heightened cross border tensions. “I look forward to the meeting with (premier) Nawaz Sharif even though the expectations have to be toned down given the terror arm which is still active in our subcontinent,” Singh told reporters in the Oval Office.

He told Obama that India was facing difficulties because the “epicentre of terrorist activity remains focused in Pakistan.” India has blamed militant groups like Lashkar-e-Tayyaba and even elements of the Pakistani state for attacks on its soil, including the assault in a luxury hotel on Mumbai nearly five years ago which killed 166 people. Singh’s visit to the White House had a valedictory tone, as he is not expected to lead his Congress Party into elections next year, with his political fortunes battered by a slowing economy and corruption claims.

Obama praised Singh as a “great friend and partner to the United States and to me personally during his tenure as prime minister of India.” Obama said that just in the past few days, India and the US had concluded a first commercial agreement which will breathe new life into a slowed civilian nuclear pact between the two countries. – DailyTimes