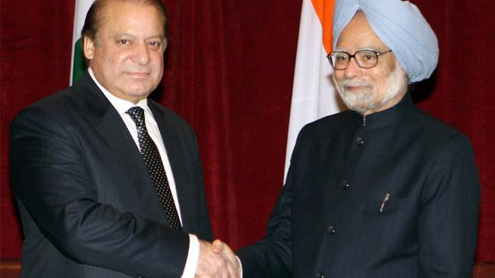 UNITED NATIONS: Prime ministers of Pakistan and India Sunday agreed to ensure ceasefire across the Line of Control (LoC) in the disputed Kashmir region, as both sides saw the meeting as positive.

Foreign Secretary Jalil Abbas Jilani said at a post-meeting press conference the two sides agreed to establish a mechanism for “not only to investigate such unfortunate incidents but also to ensure that there is no recurrence of such incidents.”He said the two political leaders had  an “extremely positive” meeting during which they expressed both their willingness and commitment to improve bilateral relations. Briefing newsmen after the meeting, which lasted more than an hour, the Foreign Secretary said the meeting aimed at creating a positive environment, conducive to pushing peace in South Asia.

Indian National Security Advisor Shiv Shankar Menon also termed the meeting “constructive and useful”.Foreign Secretary Jilani said Prime Minister Nawaz Sharif called for resolution of all outstanding issues, including Jammu and Kashmir dispute, foreign interference in Balochistan, Siachen, Sir Creek and water issues.“The Prime Minister emphasized that resolution of all issues, including Jammu and Kashmir, is certainly imperative to bring about peace and security to the region,” he told international media.Prime Minister Sharif underscored that there was “no option but to have a sustained dialogue” between the two countries.

Prime Minister Sharif believes in a policy of peace in the region.He believes the two countries can prosper while making movement on issues, which have adversely affected relations, the Foreign Secretary added.According to Jilani, Prime Minister Sharif also extended an invitation to Manmohan Singh to visit Pakistan.He said the question of terrorism certainly was also discussed.“Terrorism is as much a concern of Pakistan as of India.”“We are aware of Indian concerns  and our concerns are also well known to the Indian side (on the issue of terrorism).”

The Foreign Secretary stressed that Islamabad takes all decisions under the leadership of Prime Minister. “Let me emphasize all institutions are on the same page.”On the question of alleged funding sources of banned organization Jamaat ud Dawa, he said there was a lot of misunderstanding going on. In compliance with of the UN Security Council’s imposition of sanctions, the Punjab government took control of all those institutions run by the now defunct body.He noted that a UN monitoring team had expressed full confidence in the way the taken over institutions were now run.

With regard to Mumbai 2008 bombing trial, he pointed out that progress on the case was slowed down because of the delay in the visit of the Pakistani Judicial Commission to India. Now that the Commission had returned after interviewing and cross-examining witnesses, it would present the findings to court and this trial would proceed forward.“Kashmir is an important issue that needs to be resolved,” he underlined in response to a question. “There is no alternative to a sustained and uninterrupted dialogue,” between the two countries, he emphasized.

As regards an Indian media reporting alleging that the Prime Minister had used word “Dehati Aurat” in reference to Manmohan Singh’s complaint to the US President, the Foreign Secretary said the Pakistani leader did not use that term.Actually, the Indian media representative has also clarified that, Jilani noted.Earlier, the Indian National Security Advisor said the two sides agreed on the need to enforce ceasefire along the Line of Control.New Delhi’s National Security Advisor Shiv Shankar Menon said Prime Minister Manmohan Singh invited Prime Minister Sharif to visit India and  the Pakistani leader also invited Manmohan Singh to visit Pakistan.

He told a post-meeting press conference that the two leaders accepted the invitations but no time had been set for the visits.Peace and tranquility on the Line of Control is a pre-requisite for any progress in the stalled peace process between the two nations, Menon added.He said the Pakistani Prime Minister also raised the issues of Siachen and Sir Creek.The Indian Advisor said the two leaders decided to task their  respective DGMOs to suggest effective means to enforce ceasefire in the disputed Kashmir region.According to Menon, the two leaders reviewed the sate of relations and discussed what steps are necessary for going forward. India also brought up the issue of bringing justice to Mumbai 2008 bombing perpetrators.

Menon told journalists that Pakistan said it intended to follow the case now as  the Judicial Commission was back from India.Balochistan was also mentioned in the meeting, he said, adding there  was no question of India interfering in Pakistan’s internal affairs.“My impression it was a useful and constructive meeting.“We need to fix the issues first in order to move forward,” he said, noting that there was a desire on both sides to move forward.“We can work hard in the next few months,” he said, when pressed if the two sides discussed specific steps that could help revival of composite dialogue and peace process.“Today, we have to deal with the overwhelming issue on the Line of Control in Kashmir – we dealt with the immediate task (of addressing issues).”