A car chase, deadly shooting and rattled US Capitol 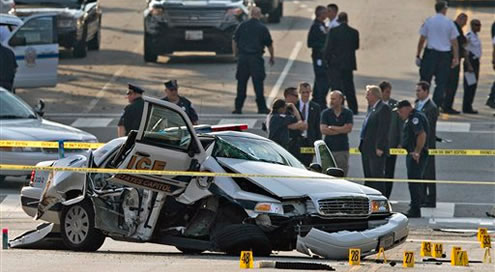 WASHINGTON: “Get in, get in!” US Capitol Police told stunned senators as they darted inside the domed building that houses Congress.

“Possible shots fired,” one told Senator Tom Harkin, who made a u-turn and headed away from the doors. Thursday’s security incident, a high-speed chase that ended with authorities shooting dead a woman who was driving a black Infiniti, sent a twist of panic coursing through parts of the Capitol, already rattled by the shooting two weeks ago at the nearby US Navy Yard where a gunman killed 12 people.

Witnesses and authorities said the driver rammed through a barricade near the White House, then raced toward Capitol Hill, setting off a chase that ended with a confrontation one block away from the Capitol building just as lawmakers were walking the grounds. Police officers raced down hallways and stairs and out the doors, their rifles drawn. After three senators were hustled in the building’s northeast entrance, the doors bolted shut. “We’re on lockdown!” yelled an officer. It was 2:20 pm. Minutes later loud buzzers rang out through the

building, jolting lawmakers and staff. The harried initial determinations by senators were that a gunman might have opened fire on Capitol Hill. “We heard about six shots,” Senator Roger Wicker told AFP.
Police “told us to take cover so we did.” Wicker was among several lawmakers outside when the suspect’s vehicle raced up Constitution Avenue, chased by police vehicles and sending staff and tourists diving to the ground.

“We heard pops. Three, four, five pops,” Senator Sherrod Brown told reporters, corroborating similar comments by Senator Bernie Sanders, who was also outside. From the relative safety of the ornate lobby by the Senate Foreign Relations Committee room, they and other lawmakers peered out the window to watch police cruisers and military vehicles race past as officers with semi-automatic rifles swept the grounds.

But some of their staff outside the Dirksen Senate Office Building were seen taking cover behind trees and vehicles. Shaken tourists were ushered into the Capitol’s north door. Once safely inside, they were subjected to security checks by nervous officers. Juan Vargas, a congressman from San Diego, said a police officer ordered him to leave the area and to remove the gold lapel badge that identifies him as a lawmaker.

“Then I got a call immediately from my staff, saying ‘be careful, there’s been a shooting’,” he added. The incident comes in the midst of a crippling US government shutdown that has seen several federal agencies shutter its doors and send hundreds of thousands of furloughed staff home without pay. Many security personnel, including US Capitol Police, remain on the job.

The lockdown — and the chaos — lifted after about half an hour. “Capitol Police did a terrific job, as usual,” Senate Minority Leader Mitch McConnell told AFP. Senate Majority Leader Harry Reid, who himself worked nights as a Capitol Police officer in 1961 to help pay his way through law school, said he telephoned the officer who was injured in the incident to express his appreciation.

“The only thing I do every day is to make sure you and everyone who works up here is safe,” the officer told Reid according to a readout of the call. – Brecorder