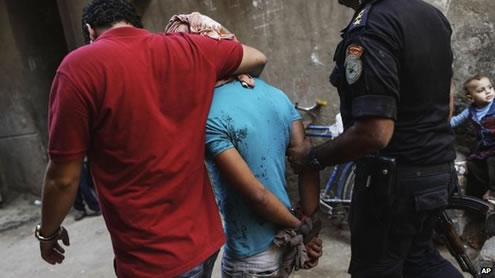 Egypt’s government is moving to seize the assets of the Muslim Brotherhood after the group’s activities were banned amid a crackdown by authorities.

It says it will also ban or take over the extensive social services the group provides – including hospitals, schools and charities. The ban came in a recent court ruling but has only now been confirmed following a hiatus for appeals. “By the law, by the last sentence, they are now banned,” an official said.

Hani Mahanna, spokesman for the minister of social solidarity – the ministry responsible for administering the ban – said the cabinet had formed a committee to investigate the Brotherhood’s sources of funds and take over its assets. He said if charities were proven to have links, “direct or indirect, with the Muslim Brotherhood – whether educational or medical – they will be bound by the court’s decision, and the government will have to take them over.”

‘Held accountable’ The 15-day appeal window on the ban was due to expire on Monday, but was imposed early so the cabinet would not be forced to meet again over the upcoming three-day public holiday, reports the BBC’s Quentin Sommerville in Cairo.

The Muslim Brotherhood was swept to power in Egypt 14 months ago. Its president, Mohammed Morsi, has not been seen in public since he was ousted by the military in July, following mass protests against his rule. Most of the group’s leaders are in jail and it says that many of its supporters have died in the crackdown. Asked about how the ban would affect the group’s millions of supporters, Mr Mahanna told the BBC that “millions” was an exaggeration of the true number, which he put at hundreds of thousands.

“At the end of the day, they are Egyptian citizens,” he said. “Those who abide by the law and the constitution have full rights but also at the same time, those who break the law will be held accountable.” Despite the ban, Brotherhood supporters continue to take to the streets to protest – albeit in smaller numbers than before.

A group that has spent most of its 85-year existence in the shadows is once again being forced underground – but like before, the Brotherhood is unlikely to disappear from Egyptian life, our correspondent says. – BBC