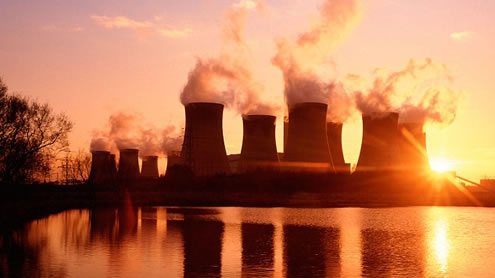 Our risk of blackouts this winter is at its highest for six years because Britain’s reserves of electricity have halved in 12 months, National Grid warned yesterday. The number of coal-based power plants operating across the UK has fallen sharply because of EU legislation which has caused older, polluting, fossil fuel plants to be turned off. The situation has been exacerbated as plans for some gas-fired plants have been suspended due to economic pressures.

Yesterday National Grid director Chris Train said: ‘Things will be tighter than they have been historically.’ The report said Britain will have ‘margins’ of only 5 per cent, the lowest since 2007, as it heads into the freezing months. The margin is the difference between the peak demand and the available supply from the UK’s power stations and import pipelines.

If it gets too low, National Grid can issue warnings to generators to begin producing more electricity to prevent a shortfall developing. But if these warnings do not work and the margin between supply and demand reaches zero, then parts of the country could experience blackouts. The country’s gas supplies also face ‘considerable uncertainty’ as dwindling North Sea reserves now account for less than half of the UK’s supply, the company warned in its annual winter outlook report.

A sharp and unexpected fall in wind power could push margins even lower. But Mr Train continued to insist last night that the lights would not go out. ‘While there have been power station closures since last winter, the information suggests that the market can meet demand in cold weather,’ he said. ‘But as the system operator, we’re never complacent.’

One fifth of the UK’s coal capacity has been closed down in the last year because of the EU’s emissions rules, even though it remains the cheapest way of producing electricity. Last month, at the Labour Party conference in Brighton, Ed Miliband pledged to freeze energy prices for almost two years following the next election if Labour wins. But industry experts have said it will deter investment at a time when Britain needs £110billion spent on new energy plants and updating the national grid.

A prolonged cold snap, such as the one seen earlier this year, is likely to drain the UK’s gas reserves as millions of families keep the heating on to ward off the chill. The amount left in Rough, the UK’s largest store, hit a record low earlier in the year after freezing temperatures lasted longer than expected. Last March Britain came within hours of running out of gas after one of the under-sea pipes that imports gas from the Continent broke down.

Critics said it showed that the country needed to build more gas storage facilities. Currently the UK has enough gas storage for only 21 days, while European neighbours can hold enough gas for 100 days. But last month ministers refused to offer subsidies to companies to build new storage plants. Last night fears over a future energy gap increased as industry sources told the Mail up to 15 planned gas fired power stations may never be built.

The Government was banking on 30 new gas power stations to produce a quarter of the UK’s energy and plug the gap left by coal closures. But now industry sources say energy companies are planning to pull the plug on up to 15 of the projects, worth a combined total of £19billion.

Angela Knight, chief executive of industry body Energy UK, said: ‘National Grid has demonstrated that the UK’s demand for energy is getting closer to the amount we can produce or buy in. ‘We have enough energy now but this timely report shows that investment is urgently needed to ensure we build the new power stations we are going to need.’ A spokesman for the Department of Energy and Climate Change said: ‘As the National Grid have said, we have enough energy to meet our needs this winter. ‘Our infrastructure can deliver more than we need and has coped well during recent very cold winter spells.’ – Dailymail

Kayani Puts an End to Rumours