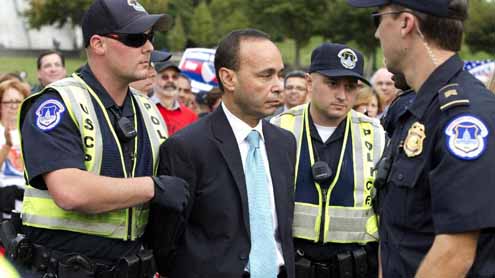 WASHINGTON — At least eight Democratic members of the House were among about 200 people arrested Tuesday after they blocked a main street near the Capitol during a massive rally seeking to push Republicans to hold a vote on a stalled immigration reform bill.

Representatives of other groups whose members attended the rally, such as United Farm Workers and Farmworker Justice, confirmed that several of their members were arrested as well. Those arrested will be charged with “crowding, obstructing and incommoding” under the local laws of the District of Columbia, the Capitol Police said. The arrests began about 4 p.m. EDT and had ended two hours later, police said in a statement.

Before being arrested, Gutiérrez said he planned the act of civil disobedience “so the speaker of the House can free Congress and finally pass immigration reform.” The rally took place after the six-time Grammy winners Los Tigres del Norte performed at the National Mall during a show in which the Mexican band dedicated each song to the estimated 11 million immigrants living in the United States illegally.

Prospects for passage of a comprehensive immigration bill appear dim. A bill passed by the Democratic-controlled Senate and backed by the White House includes billions of dollars for border security as well as a 13-year path to citizenship for those already in the U.S. illegally.

It’s unclear whether the GOP-dominated House will ever pass legislation that could form the basis for a final deal with the Senate. Most House Republicans have rejected this comprehensive approach, and the House Judiciary Committee has moved forward with individual, single-issue immigration bills that could come to the floor sometime later this year or next.

Citing the demonstration, the White House issued a statement calling for the House to take up the immigration bill. “The enthusiastic demonstration of support for immigration reform this week has proven to Congress that the broad coalition behind commonsense solutions to our nation’s broken immigration laws is as strong as it has ever been,” according to the statement from press secretary Jay Carney. “It’s time for the House of Representatives to reopen the government, pay their bills and get back to the important work of moving the economy forward.” – Yahoo