UN calls for Drone Strikes to Comply with International Law 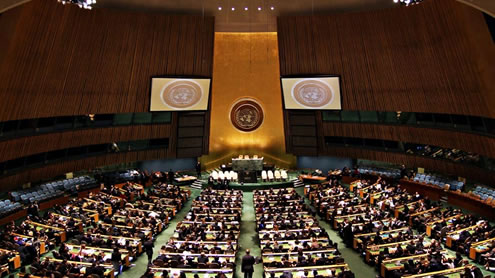 UNITED NATIONS: The UN General Assembly on Wednesday adopted a resolution calling on states using drone strikes as a counter-terrorism measure to comply with international law as the 193-member body acted on a range of issues relating mainly to human rights.

The unanimous call for regulating the use of remotely piloted aircraft against suspected terrorists was contained in a comprehensive 28-paragraph resolution, titled “Protection of human rights and fundamental freedoms while countering terrorism”. The portion about drone strikes was included as a result of intensive efforts made by the Pakistan delegation.

It is the first time that the General Assembly has spoken out on the use of armed drones — a key but controversial component of the US war against terrorism, including against targets inside Pakistan.

In this regard, the Assembly underscored the “urgent and imperative” need for an agreement among member states on legal questions about drone operations.

The resolution urges states “to ensure that any measures taken or means employed to counter terrorism, including the use of remotely piloted aircraft, comply with their obligations under international law, including the Charter of the United Nations, human rights law and international humanitarian law, in particular the principles of distinction and proportionality”.

The text also calls for taking into account “relevant United Nations resolutions and decisions on human rights, and encourages them to give due consideration to the recommendations of the special procedures and mechanisms of the Human Rights Council and to the relevant comments and views of United Nations human rights treaty bodies”.

The text also encouraged “states while countering terrorism to undertake prompt, independent and impartial fact-finding inquiries whenever there are plausible indications of possible breaches to their obligations under international human rights law, with a view to ensuring accountability”.

It may be recalled that the Prime Minister Nawaz Sharif, in his address to the United Nations General Assembly on Sept 27, 2013, strongly raised the issue of drones. He had said that the use of armed drones in the border areas of Pakistan were a continued violation of Pakistan’s territorial integrity and also stressed that they result in casualties of innocent civilians and are detrimental to efforts to eliminate extremism and terrorism.

Foreign Office spokeswoman Tasneem Aslam said Pakistan has been raising the issue of drones at all relevant international fora including the UN to raise international public opinion against the use of drones. The issue of drone strikes will also be taken up by the UN Human Rights Council in its March 2014 session. – Dawn

The Case Against Multivitamins Grows Stronger