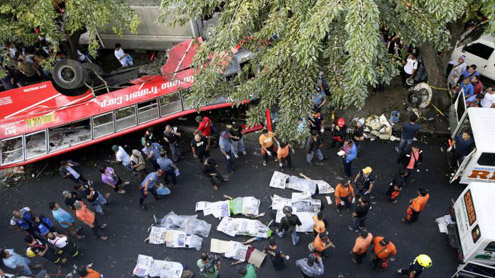 A bus veered off a mountain road in the northern Philippines and fell into a 500-meter (1,600-foot) deep ravine Friday, killing at least 13 people, including a Dutch woman, officials said.

Another 31 were being treated in a hospital, said Fairlane Amungan, a provincial disaster response official. Among them was a Dutchman who was traveling with the woman from the Netherlands who died, and two children.

The Office of Civil Defense said the bus from Manila had about 47 passengers on board. Amungan said authorities were still determining the exact number of people on the bus as they searched for more victims.

Garcia said the weather was fine at the time of the crash, and investigators were looking into mechanical problems or human error.