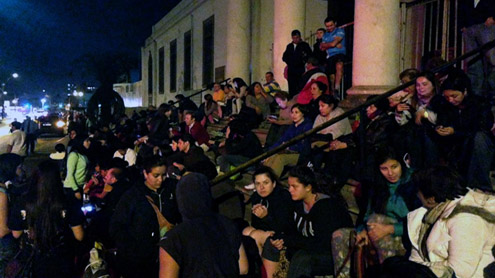 Chile ‘s 8.2 magnitude earthquake in northern coastal areas, 5 people were killed and several injured when 2 meter waves hit the beach later in other countries , including Chile tsunami warning was issued. According to foreign news agency earthquake in Chile ‘s northern coastal areas , resulting in 5 people were killed and several wounded when a 2 meter high waves hitting the beach Chile , Peru , and a tsunami warning in a kuadur the coastal population continues to move to safety guidelines have been released . Tsunami warning after Beaches in Peru ‘s capital Lima connect all kinds of roads have been closed to traffic . 6.2 magnitude earthquake in Chile , plus Bolivia has been logged , but no loss was reported .

The Pacific Tsunami Center from Colombia , Panama and Costa Rica to prepare for a tsunami has issued guidance . Officials say the tsunami Currently, nothing can be said about the so -magnitude earthquake triggered a tsunami in the coastal areas, the risk can not be ignored . The 8.8 magnitude earthquake in Chile in 2010 and the tsunami resulted in over 500 deaths and economic losses of $ 30 billion . -Timesofpakistan.pk

EarthQuake in Chili America by thetimesofpakistan