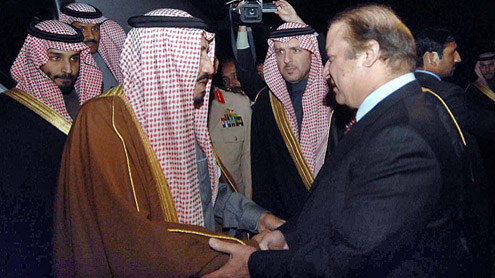 Ambassador Ali Saeed Asseri, who remained Saudi Arabia’s envoy to Pakistan for nine years, is returning to Islamabad for a second stint. Mr Asseri will succeed Abdul Aziz Al-Ghadeer who would be leaving after completing his tenure in a couple of months. Talking to Dawn in his office, Mr Ghadeer described his over five-year stay in Pakistan as eventful. Speaking for the first time about criticism in Pakistan of the $1.5 billion aid given by the kingdom, he said Saudi Arabia “had no hidden agenda”. During Crown Prince Salman bin Abdulaziz Al-Saud’s visit to Islamabad Saudi Arabia donated $1.5 billion with the condition that the source of donation should not be identified. The opposition questioned the gift from the unidentified source and said that it was meant to make Pakistan change its Middle East policy, particularly on Syria.

“We stand with the people of Pakistan and have worked with all governments,” he added. He stayed short of describing the debate over $1.5 billion gift as politically motivated, but reminded that the Saudi government had given bigger amounts to the PPP government during its five-year tenure. Mr Ghadeer wondered why there was no criticism of the Saudi money in past.

He asked Pakistan’s political parties to cooperate with each other instead of becoming rivals. In one of his first interviews after assuming the charge in 2009 the outgoing envoy had said that Saudi Arabia did not have any favorites in Pakistan. Talking to this correspondent on Thursday, Mr Ghadeer said he worked with whosoever was in power for the sake of promoting bilateral ties. ASSERI: Ambassador-designate Mr Asseri is currently posted in Lebanon as the kingdom’s envoy.

He had to leave Pakistan in 2009 following the then government’s claim of threats to his life from terrorists. Mr Asseri, who himself is a counter-terrorism expert, never believed in those threats, but had agreed to moving out. Mr Asseri was the author of a book — Combating Terrorism: Saudi Arabia’s Role in the War on Terror — in which he discussed the Saudi experience of fighting radicalisation at home. -Dawn