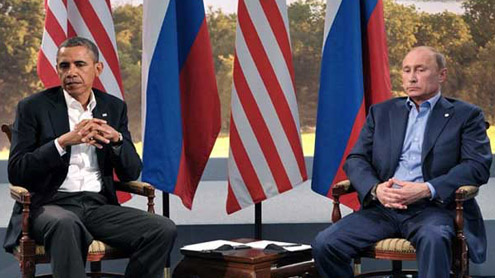 US President Barack Obama urged Russian leader Vladimir Putin in a phone call Monday to press pro-Moscow groups to lay down their arms in Ukraine, as the Kiev government sought UN help to tackle the growing insurgency. Tensions between the US and Russia were exacerbated by two episodes at the weekend — a confrontation in the Black Sea in which a Russian warplane “buzzed” a US destroyer and a visit to Kiev by CIA chief John Brennan. A White House statement said the telephone call came at Russia´s request and that Obama accused Moscow of supporting “armed pro-Russian separatists who threaten to undermine and destabilize the government of Ukraine”.

Obama told President Putin that all “irregular forces in the country need to lay down their arms”. Putin denied involvement with the pro-Russian insurgents, but an unconvinced European Union expanded its sanctions against officials accused of seeking to break up the ex-Soviet country. Putin told Obama that Russia was not sponsoring the Kalashnikov-toting separatists who have seized a string of key state buildings in eastern Ukraine, according to the Kremlin´s account of the phone call between the two leaders. He urged Obama to “do everything possible to avoid the use of force and a bloodbath”, the Kremlin added. -Thenews