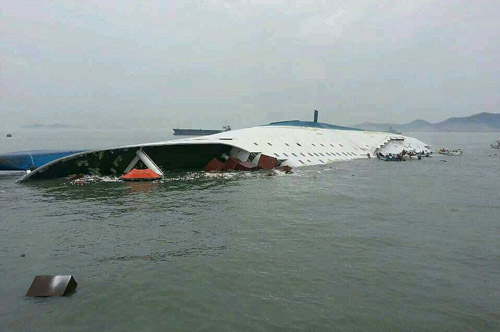 South Korea’s government said 292 people are missing after a ferry carrying hundreds of high school students sank en route to the resort island of Jeju. At least three people, including a student, died in the accident. Of the 459 passengers and crew, 164 people have been rescued including 78 students, Kang Byung Kyu, minister of Security and Public Administration said at a televised press briefing. A total of 55 people were hospitalized, mainly with minor injuries. The government earlier said 368 people were rescued, a mistake it said was caused by double-counting.

The passengers included 324 students and 14 teachers from Danwon High School near Seoul on an excursion to Jeju island, Kim Tae Eun, an official at the school southwest of Seoul, said by phone. A board posted at the school trying to track those rescued showed that only 80 had been accounted for. “Luckily, I was able to jump, like many others,” Im Hyeong Min, a student from the school, told YTN in a phone interview after being rescued. Another student, whose name was not provided, broke down in tears as he spoke to Yonhap TV about his friends, who had been inside their cabins before the ship sank.

Coast guard footage showed the 6,325-ton ferry submerged with only its bow visible 20 kilometers (12 miles) from Byeongpoong island off the southwest corner of the Korean peninsula. The government said it’s still investigating what caused the vessel to sink, with local media including YTN TV saying it sailed into rocks in foggy conditions. The ship left from the port of Incheon last night on a trip that generally takes almost 14 hours. A U.S. Navy amphibious assault ship, which was on a routine patrol in the Yellow Sea, was heading to the area to help with the rescue operation, Stars and Stripes reported on its website. The water temperature in the area is 13.2 degrees Celsius (56 degrees Fahrenheit), according to South Korea’s National Fisheries Research & Development Institute.

The vessel, named “Sewol,” or “time and tide” in Korean, is owned and operated by privately-held Chonghaejin Marine Co., a company official said by phone, asking not to be named citing internal policy. It’s the second accident in less than a month involving a Chonghaejin ferry, after its “Democracy No. 5” collided with a fishing boat near Incheon late last month, with no casualties, according to a company official who asked not to be named, citing company policy.

The three confirmed casualties in today’s accident include high school student Jeong Cha Woong, according to the security ministry. Another was Park Ji Young, a female employee of the boat operator, South Korea’s disaster control agency said. Kang said the third hasn’t been identified. The coast guard received the accident alert from the ferry at 8:58 a.m. local time, the ministry said. The ship first listed, with rescuers lowered from helicopters rushing to pull survivors from one side of the ship.

As the vessel began to sink, passengers were told to jump into the water, survivors said, and within three hours the ferry had sunk with just a bit of the bow remaining above water. The rescue effort also involves South Korea’s special Navy forces including divers, 31 helicopters and 60 vessels, the ministry said in an e-mailed statement. The ferry can carry as many as 921 passengers and 130 vehicles traveling between Incheon and Jeju Island. Chonghaejin Marine operates two vessels on the Incheon-Jeju route as well as two other services in the southern coastal area, according to the company’s website. The ‘Sewol’ left Incheon two hours late yesterday due to fog, Yonhap News reported. South Korea has been investing in new cruise terminals in Incheon and other coastal cities to attract more tourists from China and Japan. That has prompted companies such as Royal Caribbean Cruises Ltd., the world’s second-largest cruise line, to expand into Asia as economic growth is making it more affordable for people to travel by ships.  Routes to Jeju, an island also known as ‘South Korea’s Hawaii,’ are especially popular. A total of 2.3 million foreign tourists visited Jeju last year, with Chinese visitors accounting for 78 percent, according to data on the Jeju government’s website.