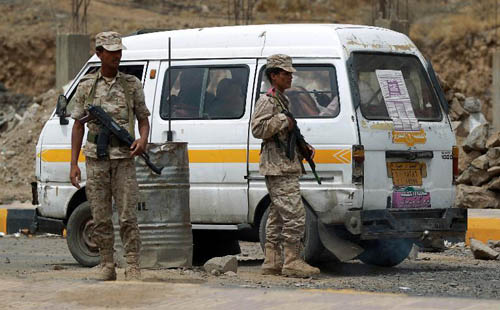 Suspected Al Qaeda militants killed 18 Yemeni soldiers in separate ambushes on Tuesday as the army launched a ground offensive against their remaining strongholds in the south, medical and security sources said.

Twelve militants were also killed when the ambush in Shabwa province sparked a gunfight, tribal sources said. Ten soldiers were wounded and 15 captured, medics and an officer said. The ground offensive, which was launched just hours before the opening of a donors’ conference in London, seeks to capitalise on Al Qaeda losses in a blistering US-backed air offensive last week in which nearly 60 suspected militants were killed. Commanders are seeking to expel the militants from a series of smaller towns and hill districts in Abyan and Shabwa provinces where they retained a presence after a 2012 offensive in which the army recaptured the major towns.

Al Qaeda in the Arabian Peninsula — a merger of the network’s Yemeni and Saudi branches — is regarded by Washington as its most dangerous franchise and has been subjected to an intensifying drone war this year. The militants took advantage of a 2011 uprising that forced veteran president Ali Abdullah Saleh from power to seize large swathes of the south and east, from which the army has struggled to evict them, despite backing from militia recruited among the local tribes. Militants ambushed the army convoy near Al-Saeed, one of several towns in Shabwa province where troops backed by militiamen advanced overnight, an officer said.

Armed with machine guns and rocket-propelled grenades, they seized a troop carrier and captured 15 soldiers inside, and also destroyed three other vehicles, he added. The army sent “massive” reinforcements to the area, another officer said. Hours later, militants in Abyan province ambushed a seven-vehicle convoy advancing towards Wadi Daiqa, where Al Qaeda suspects were positioned, an officer there said. They killed three soldiers and wounded seven, the source said.

Tuesday’s incidents were a major setback to an operation launched amid great fanfare ahead of the Friends of Yemen meeting of donor governments keen to bolster security in the impoverished Arabian Peninsula country where Al Qaeda attacks have spread even to the capital. Defence Minister Mohammed Nasser Ahmed has travelled to the south to oversee the offensive, which “will not stop until these areas are purged of Al Qaeda militants,” an official said. In the capital, President Abdrabuh Mansur Hadi said extra “security measures” had been taken over fears of Al Qaeda reprisals. -dawn

Veena Malik returns to Pakistan 'as a mature girl'