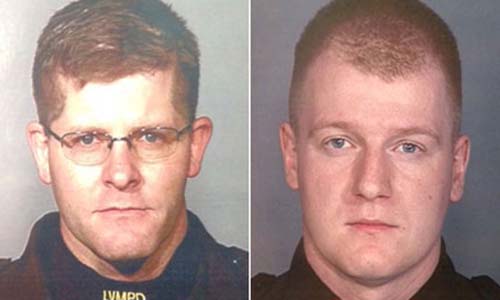 Two Las Vegas police officers and a civilian were killed in an apparent ambush Sunday that ended with the two gunmen killing themselves. One of the attackers yelled “This is the start of a revolution” before shooting the officers and stripping them of their weapons and ammunition, the Las Vegas Review-Journal said.

Two officers were “ambushed” and shot by the gunmen — a man and a woman — as they ate lunch at CiCi’s Pizza, Sheriff Douglas Gillespie told reporters. One of the officers died at the scene, while the second subsequently died in surgery. A police dispatch call was made around 11:22 am (1822 GMT). The attackers then ran across the parking lot to a nearby Walmart store, and the Review-Journal said they exchanged gunfire with and ultimately killed a civilian who was carrying a concealed weapon.

The civilian, who has not yet been identified, was found dead inside the front door. It’s a tragic day, it’s a very, very difficult day but we still have a community to police and we still have a community to protect,” Gillespie said. “We will be out there doing it with our heads held high but an emptiness in our hearts.” The male shooter, described as a tall white man, yelled “everyone get out” before shooting, Assistant Sheriff Kevin McMahill told a news conference earlier. The two gunmen, who have not yet been named, then went to the back of the Walmart for “some kind of suicide pact,” McMahill added. Gillespie said a preliminary investigation suggested the woman had first shot the man before taking her own life.