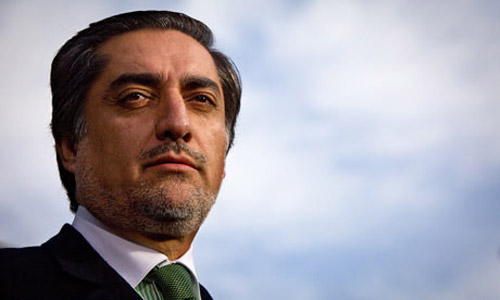 Afghan presidential front-runner Abdullah Abdullah said Thursday he wanted “good neighborly relations” with Pakistan. Abdullah, speaking to a Washington think tank via Skype two days before the run-off election, said he would seek cooperation with Pakistan — which he noted has also experienced a series of deadly attacks.

“Today one harsh reality is that both countries are faced with the same challenges and it is in the interest of both countries to deal with it in a genuine spirit of good neighborly relations,” Abdullah Abdullah told the Atlantic Council. Abdullah said he also sought to work with Afghanistan´s other neighbors including India. Abdullah, an ophthalmologist turned foreign minister who lost a contested 2009 election to Karzai, placed first in the initial round of the latest election. The candidate reiterated that he would sign an agreement with the United States that would allow Obama to maintain nearly 10,000 troops in Afghanistan after the withdrawal of most combat forces this year.

Hamid Karzai has refused to sign the agreement, saying it may allow US troops to enter Afghan homes. Separately, Abdullah voiced hope that five Taliban who were released in a swap for captive US soldier Bowe Bergdahl would not return to the insurgency. “Our main concern… about those who have been released is that they do not join the battlefield because those are amongst those criminals who have committed crime in a massive way against the Afghan people,” Abdullah said. Abdullah said that previous Taliban militants released in goodwill gestures have returned to the fighting. But he stopped short of criticizing President Barack Obama´s decision to free the five men in the exchange, which has come under intense fire from Republican lawmakers. –thenews