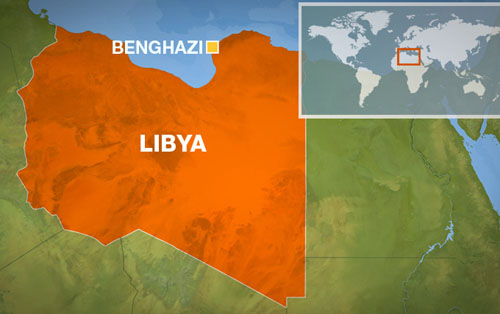 Forces loyal to rogue Libyan general Khalifa Haftar clashed Sunday with militias in the eastern city of Benghazi, killing eight people and wounding 15, military and medical sources said. The clashes were among the fiercest since Khalifa began his offensive against radical groups in Benghazi, dubbed “Operation Dignity,” on May 16, when at least 76 people were killed.

Sunday´s fighting left at least five people dead and 12 wounded, according to the Al-Abyar hospital southwest of Benghazi, where Haftar´s forces are treated. Militias in Benghazi rarely reveal their dead and wounded, but on Sunday two of them were killed and several wounded in an air raid on the headquarters of the Al-Rafallah Sahati group, one of its commanders told AFP. Two hospitals also reported the death of one person whose identity was not disclosed, and said three were wounded, including two civilians of Sudanese nationality.

Haftar´s forces launched an offensive early Sunday in the Sidi Fraj area of Benghazi, a stronghold radical group, including Ansar al-Sharia, which Washington classifies as a “terrorist organisation”. The sound of heavy weapons fire could be heard on the streets of the suburb, and families fled affected areas, witnesses said. A blackout affected a large part of the city for 10 hours, with state news agency LANA saying rocket fire had hit a power station, but the operator said it carried out repairs and electricity was later restored.

The fighting ceased on Sunday evening, although intermittent gunfire could still be heard from the centre of Benghazi. Since launching his offensive last month, Haftar has rallied support from the public and members of the security forces. But the authorities have labelled him an “outlaw” and accused him of trying to mount a coup. Near daily attacks in Benghazi, cradle of the 2011 revolt that ousted dictator Moamer Kadhafi, have killed dozens of members of the security forces. The attacks have been blamed on radical militias based in the city. -thenews