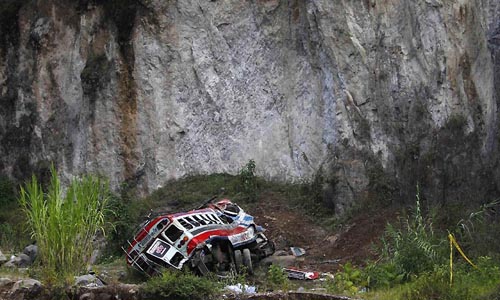 A bus carrying tourists plunged off a mountain road into a gorge in a Himalayan region in northern India, killing 11 people, police said Tuesday. “All the 11 dead are tourists, the toll could rise,” said B.S. Thakur, a senior state police officer.

Around 40 others were injured in the accident that happened late Monday in the Sirmaur district of Himachal Pradesh state, around 150 kilometres (90 miles) from the state capital Shimla. Local villagers said they struggled in the dark to remove the bodies from the bus as police were late to arrive at the scene.

Around 140,000 people are killed on India’s roads each year — which works out at 16 an hour — according to the last available government statistics. Bad roads, speeding vehicles and poor driving were among the contributing factors. –dawn