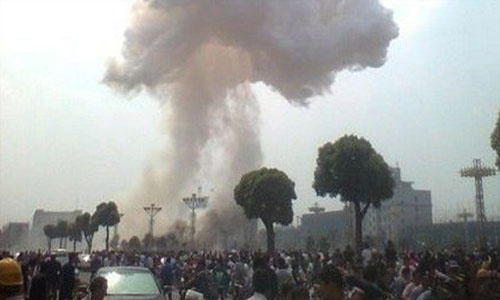 At least 17 Chinese soldiers have died in an explosion at a weapon storage facility, state media said Wednesday. The blast Tuesday afternoon occurred in Hengyang city in central China´s Hunan province as “soldiers were piling up ammunition”, the official Xinhua news agency reported.

No cause for the explosion was given and authorities were investigating, it said. In a separate incident involving the military earlier this month, a Chinese navy plane crashed on a training mission over the eastern coastal province of Zhejiang, Xinhua reported at the time.

It was not clear if there were any casualties. China has the world´s largest standing army, with 2.3 million troops. The country has boosted military spending at double-digit percentage rates for more than a decade as it seeks to modernise its armed forces. It will be decades before China rivals the United States as a military superpower, but its spending has caused Asian neighbours to boost their own military budgets as well. -thenews