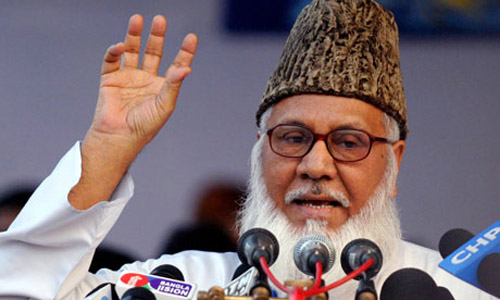 Bangladesh’s war crimes court is set to deliver a verdict Tuesday against the leader of the largest Islamic party, who could face the death penalty for his alleged crimes during the 1971 war. Motiur Rahman Nizami, 71, faces 16 charges ranging from mass killing to rape, arson and genocide, relating to violence committed by one of the most notorious militias during the war which he is suspected of leading.

A death sentence could trigger violent protests in the country as Nizami’s Jamaat-e-Islami party has a strong grassroots base with hundreds of thousands of activists and supporters. Similar verdicts including the execution of a senior Jamaat leader last year saw massive unrest nationwide as JI supporters fought with security forces in towns and cities, leaving around 200 people dead. Police were seen patrolling important places in the capital Dhaka while private television Channel 24 said border guards have been deployed in major cities and towns across the country to prevent any violence.

Nizami, the president of Jamaat-e-Islami, pleaded not guilty and accuses the country’s secular government of using the special war crimes court to target opposition leaders. Prosecutors say Nizami was one of the chief architects of the mass killings of Bengalis in the 1971 war which saw Bangladesh emerge from what was then called East Pakistan. The government says three million people died in the war. Independent researchers put the estimate between 300,000 and 500,000. “He established the Al-Badr forces during the war to support the Pakistani army,” prosecutor Mohammad Ali told AFP ahead of the verdict and the sentencing, which he said would come on Tuesday.

As head of Al Badr, he was involved “in committing crimes against humanity such as genocide, murder, rape and arson” as well as the murder of the country’s top intellectuals, Ali said. Nizami, a minister in the Islamist-allied government of 2001-6 is already on death row after being sentenced to death in January for trafficking weapons and trying to ship them to a rebel group in northeast India. -dawn