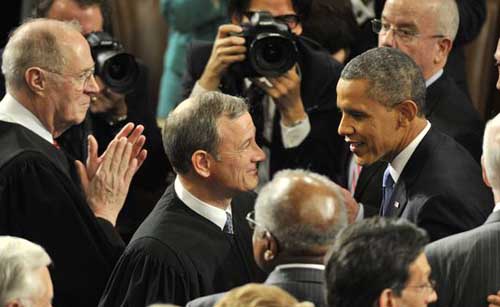 The US Supreme Court on Thursday placed limits on the president’s power to appoint high-level judges and officials while Congress is in recess, ruling that Barack Obama violated the Constitution. In a keenly anticipated decision, the high court’s nine justices invalidated three so-called “recess appointments” made by Obama in early 2012 when the Senate was holding only pro forma sessions every three days.

They said the Constitution “empowers the president to fill any existing vacancy during any recess — intra-session or intersession — of sufficient length.” But in a unanimous decision, the court said Obama had overstepped his authority in making the nominations to fill positions on the National Labor Relations Board. “The president made the recess appointments before us during a break too short to count as recess under the (constitutional) Clause. And for that reason, the appointments are invalid,” said Justice Stephen Breyer, who delivered the court’s opinion.

The ruling was a victory for Obama’s Republican rivals, who had accused him of trying to slip nominees past lawmakers in order to block the Senate’s legal right to oppose them. The issue had reached the court thanks to a lawsuit filed by the Noel Canning company, which contested the legitimacy of the NLRB appointments after the board ruled against it in a dispute. -dailytimes