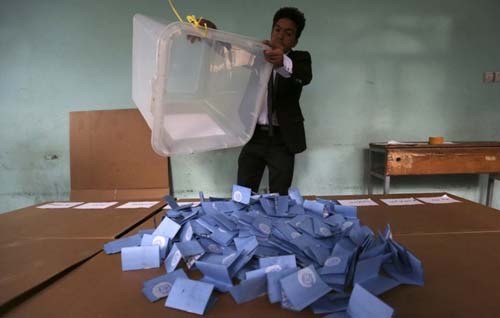 Afghanistan’s presidential election result has been delayed for several days, officials said Tuesday, as a dispute over alleged fraud threatens to derail the country’s first democratic transfer of power. The preliminary result of the June 14 run-off vote had been due on Wednesday but was postponed at short notice to allow ballots in 2,000 voting centres to be checked — throwing the handover process into turmoil.

Abdullah Abdullah, previously seen as the poll front-runner, has said he would reject the result due to “blatant fraud”, while his poll rival Ashraf Ghani said the election was clean and claimed victory by more than one million votes. The United Nations and donor countries have been trying for months to prevent a contested election outcome, fearing political deadlock and ethnic violence as US-led troops withdraw from the country. But with the two candidates at loggerheads, many fear the impasse could tip Afghanistan into a risky period of street protests and uncertainty.

“We have started inspecting the votes in around 2,000 polling centres after the commission decided to make sure of transparency,” Independent Election Commission member Sharifa Zurmati told AFP. “The announcement has been delayed for several days until the inspection ends. We will hopefully finish the inspection on Friday and then set a date.“

“During the inspection, some votes will be invalidated.“ About 6,000 voting centres were open across Afghanistan on June 14, when voters defied the threat of Taliban attacks to choose between former foreign minister Abdullah and Ghani, an ex-World Bank economist.