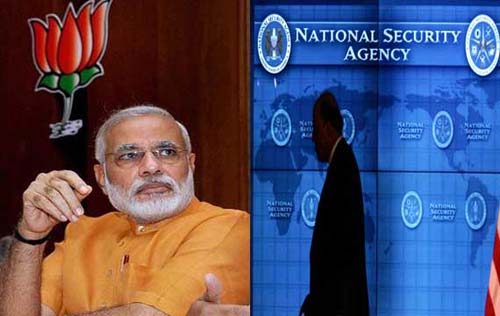 Preparations for a grand handshake between Narendra Modi and President Barack Obama in Washington this September were on Tuesday clouded by revelations that the US may have spied since 2010 on the Prime Minister’s party, the BJP. The disclosures led India’s foreign ministry to issue a firm but non-animated response, even as the BJP fronted only second-rung leaders to criticise the US, underlining a deep dilemma within the government on a controversy that couldn’t have come at a worse time for Modi.

The documents that form the basis for the revelations, made by The Washington Post on Tuesday morning, do not necessarily mean that the US National Security Agency spied on the BJP. But the documents confirm that the NSA intended to spy on Modi’s party in 2010 and sought and obtained approvals from attorney general Eric Holder and a federal court to spy on the BJP. The party was among 139 countries, multiple UN and international finance agencies and six overseas political parties that the NSA, after the approvals, was allowed under US law to spy on. Lebanon’s Hezbollah ally Amal, the Pakistan Peoples Party, Egypt’s Muslim Brotherhood and National Salvation Front and the pan-Latin American Bolivaria Continental Coordinator are the other political parties the NSA intended to spy on. The documents were leaked to the Post by NSA whistle blower Edward Snowden.

“It is totally unacceptable that the privacy of Indian organisations, individuals and government agencies be violated,” foreign ministry spokesperson and joint secretary Syed Akbaruddin said. “We have communicated our concerns in the past to the US and, if these reports are correct, we will take this up with them again.” Senator John McCain is visiting India on Wednesday to meet Narendra Modi and New Delhi is expected to articulate its concerns to him. US secretary of state John Kerry, likely to visit India later this month, may also face questions. Information and broadcasting minister Prakash Javadekar called the possible snooping “serious”, while the BJP’s Rajiv Pratap Rudy dubbed the revelations a subject of “deep concern”.

But the responses stood in stark contrast to the aggressive demands the BJP would make repeatedly of the previous UPA government over allegations that the NSA spied on India’s embassy in Washington and its permanent mission to the UN in New York. Modi, in the run-up to the Lok Sabha elections that brought him to power, had repeatedly tried to contrast what he described as the UPA’s “weak” foreign policy with his promise of strong leadership. Yet, following in the footsteps of the world leaders who did embarrass the US over the NSA’s snooping will not be easy for Modi at a time he has just begun to build bridges with Washington after almost a decade of acrimony.

Brazilian President Dilma Rousseff, who Modi will meet later this month, had pulled out of a visit to the US last year after reports that the NSA had spied on her presidential communications systems. But Rousseff does not share Modi’s messy history with the US. The US, which denied Modi a visa in 2005 over his alleged complicity in the 2002 Gujarat riots, had only early this year established top-level diplomatic contact with him when then ambassador Nancy Powell flew down to Gandhinagar to meet Modi.

Obama had telephoned Modi soon after his victory in mid-May and invited him to Washington — a trip the Prime Minister is scheduled to make in September to bury the ghosts of the rancour that has previously marked his ties with the US. The Modi government has since been slowly preparing for the visit as an effective apology from the world’s most powerful nation to the Prime Minister for treating him like a pariah for a decade. Privately, officials insisted they were not surprised by the revelation of the NSA spying on India or organisations. But the officials conceded that appearing to meekly accept spying, once established in public perception, can — as it did for the Manmohan Singh government — invite charges of weakness that Modi and his colleagues are better known for levelling at others. –abplive.in