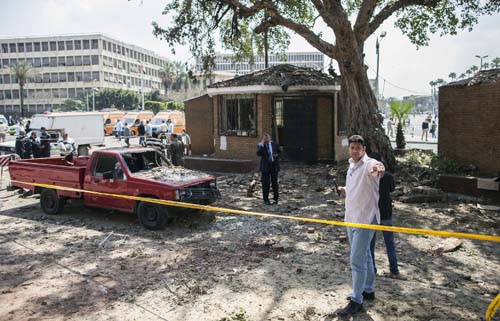 Police arrested one of two men who were in the car while the second managed to escape, interior ministry spokesman Hani Abdel Latif told AFP, adding that the cause of the blast was still unknown and there were no casualties. A security official however told AFP that a small bomb had exploded under the car near an Air Force hospital in a northern Cairo neigh bour hood. Militants have stepped up their attacks against security forces since the army ousted Islamist president Morsi last July and the military-installed authorities launched a deadly crackdown on his supporters.

Egypt will mark on Thursday the first anniversary of Morsi’s overthrow, led on July 3 by ex-army chief Abdel Fattah Al-Sisi, who won a May presidential election. On Monday, two disposal experts, a police colonel and lieutenant colonel, were killed as they attempted to defuse bombs outside the Ittihadeya palace in eastern Cairo. Police said on Wednesday they have arrested four men suspected of being involved in the blasts. Militant groups say their attacks come in retaliation for a government crackdown on Morsi supporters that has left more than 1,400 killed, while at least 16,000 have been jailed, and about 200 sentenced to death in speedy mass trials.

Attacks by militants have killed almost 500 police and soldiers since Morsi’s overthrow, the government says. The attacks have dropped over the past few months as police killed or arrested dozens of suspected militants. Last week, however, five small bombs went off on Wednesday in Cairo metro stations, wounding five people, followed by two bombs on Saturday in a telecommunication tower that killed a watchman’s wife and daughter. The interior ministry said on Wednesday that three men have been arrested in connection with one of the metro blasts. –channelnewsasia