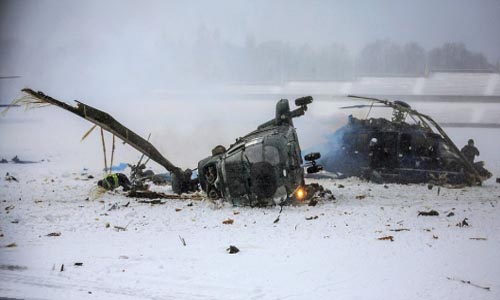 A military helicopter crashed into a residential area on the fringes of Vietnam´s capital Hanoi on Monday, killing more than 10 people, a witness and government officials said. The helicopter came down during exercises early in the morning near a housing area about 30 kilometres (19 miles) west of the city centre and local officials were investigating the incident and assessing the damage.

Kieu Van Kinh, an official at the People´s Committee of Thach Hoa commune in Hanoi´s Thach That district, said more than 10 military personnel were killed. Officials did not say whether there were any survivors or if any civilians were hurt or killed. A Reuters witness saw fire trucks arrive and people carrying away what appeared to be pieces of wreckage. Troops and police blocked access to the crash site, which was near a military airport.

A resident told Reuters she had counted at least 12 bodies around the crash site. Several vendors said those on board were paratroopers who had bought food from them just moments earlier. It was unclear what model the chopper was. Vietnam´s military helicopters are mostly Soviet-era models. -thenews