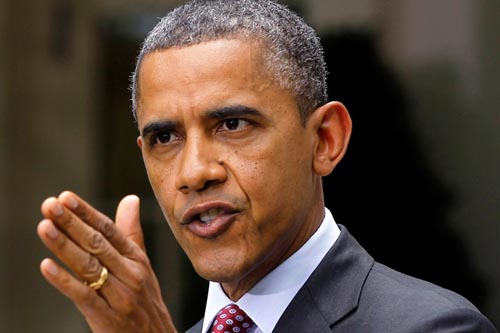 US President Barack Obama has sided with Republican Texas Governor Rick Perry on recommendations for improving security on the US-Mexico border. While visiting the state, Mr Obama said he had no “philosophical objection” to increasing the number of border patrol agents and re positioning them.

But Mr Obama said such action was held up by Congress’ delay in approving his request for extra funding. The White House asked for $3.7bn (£2.2bn) in extra funding on Tuesday. Congress has the capacity to work with all parties concerned to directly address this situation,” Mr Obama told reporters. The Democratic president met the Republican governor and local leaders on Wednesday to discuss an immigration crisis at the southern border. More than 50,000 unaccompanied children – most from Central America – have been caught trying to cross illegally between October and 15 June. President Obama urged parents in Central America not to send unaccompanied children on the dangerous journey through Mexico to try to enter the United States.

Parents need to know this is an incredibly dangerous situation and it is unlikely that their children will be able to stay,” the president said. Mr Obama said Mr Perry’s plan regarding enhanced border security “sounded like it made sense”, adding that resources for such efforts would be available should Congress approve the supplemental funding package he put forth. The emergency funding would include money for the hiring of 40 extra immigration judge teams, drone surveillance of the border, medical services and transportation costs, expanding a border security task force in Central America and overtime for border patrol workers. “

The challenge is, is Congress prepared to act to put the resources in place to get this done?” he asked. Following their meeting, Mr Perry put much of the onus for fixing the “national security crises occurring along the Texas-Mexico border” on Mr Obama, however. “Five hundred miles south of here in the Rio Grande Valley there is a humanitarian crisis unfolding that has been created by bad public policy, in particular the failure to secure the border,” Mr Perry wrote in a statement. “Securing the border is attainable, and the president needs to commit the resources necessary to get this done,” he added. Mr Obama’s additional funding request follows months of political gridlock over a wide-reaching bill to overhaul the immigration system.