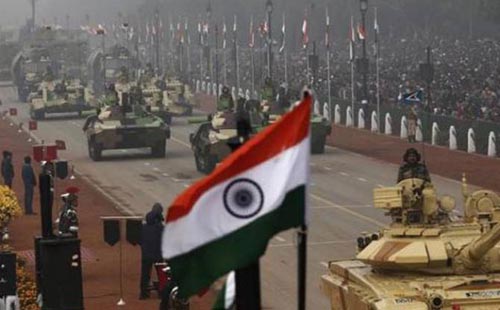 India yesterday announced it would lift the cap on foreign direct investment in the defence sector to 49 percent and announced a 12-percent rise in military spending as part of efforts to modernise its armed forces.  In his first budget, Finance Minister Arun Jaitley raised defence spending for the current financial year to 2.29 trillion rupees ($38.3 billion), up from 2.03 trillion rupees budgeted in the 2013-2014 year.

Jaitley, who is also defence minister, said he planned to open up the military industry to foreign investment, lifting the limit from 26 percent to 49 percent, with Indian companies retaining management and overall control. “There can be no compromise with the defence of our country,” Jaitley told parliament. “Modernisation of the armed forces is critical to enable them to play their role effectively in the defence of India’s strategic interests,” he added. The budget also included 10 billion rupees ($167 million) for railway lines in border areas that is expected to be targeted at areas neigh bouring rivals Pakistan and China.

India has eyed Chinese investment in railways near its border anxiously, with Beijing ploughing billions of dollars into infrastructure in Tibet.  India overtook China to become the world’s biggest importer of arms in 2010, according to the Stockholm International Peace Research Institute, which monitors the global arms trade. The US has displaced Russia as India’s biggest arms supplier, importing $1.9 billion of military kit from the US in 2013, according to research from IHS Jane’s. Jaitley said last month he aimed to speed up buying in the interests of “national security”, while experts expect a more muscular foreign policy under the new adminstration.

India’s military has grown increasingly frustrated at the state of its equipment as it looks to defend itself against an increasingly assertive China and from Pakistan. The right-wing government under Prime Minister Narendra Modi unveiled the budget  promising a new era of fiscal discipline, higher growth and greater opportunities for foreign investors. Jaitley vowed to raise the pace of economic growth to 7-8 percent in three to four years from less than 5 percent now. The budget was a “roadmap” to where the two-month-old government is headed — toward lower borrowing, more privatisation, greater openness to foreign investment and faster expansion, Jaitley told parliament. -thedailystar