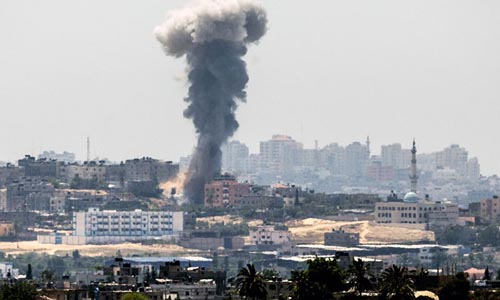 Israeli air strikes on the Gaza Strip killed 30 people Saturday, including two severely handicapped women in a care facility, medics said. The violence brought the toll on the fifth day of the conflict to 135, with nearly 950 people wounded, according to Gaza emergency services spokesman Ashraf al-Qudra. In the latest strikes, eight people were killed in raids on Gaza City, central El-Bureij and northern Jabaliya.

They included a woman aged 25, and a 16-year-old, Qudra said. Earlier, six men were killed in the Sheikh Radwan district of western Gaza City, Qudra said. Aged from 21 to 58, they were sitting outside homes in the area when the strike hit, witnesses said. Neighbours told AFP two nephews of former Hamas prime minister Ismail Haniya were among them and named them as Nidal and Alaa al-Malash. Their deaths followed an early morning strike that killed two women at a charitable association housing the disabled in Beit Lahiya in northern Gaza. The women, Suha Abu Saada and Ola Washahi, both had severe mental and physical handicaps, association director Jamila Alaywa said. Four others were wounded in the attack — three residents and a helper, she said.

Another three people were killed in eastern Gaza City and three in an attack on the western side of town. Earlier, Qudra announced the deaths of eight other Palestinians in raids that hit targets including a bank, two mosques and the houses of Hamas officials. Israel´s military said at least one of the mosques was being used to store weapons. Israel began Operation Protective Edge on Tuesday in an attempt to halt cross-border rocket fire by militant groups. Gaza militants have fired approximately 525 mortar rounds and rockets that struck Israel, while another 138 rockets were intercepted by the Iron Dome missile defence system, the army said on Saturday.

It is the deadliest violence since November 2012, with a growing number of rockets fired at Jerusalem and Tel Aviv and even as far north as Hadera, 116 kilometres (72 miles) away. No Israelis have been killed. One Israeli soldier was severely wounded in a mortar attack Thursday, and another man very seriously injured when a rocket hit a petrol station in the southern port city of Ashdod on Friday. Two soldiers were lightly wounded along the border with Gaza when Palestinians fired an anti-tank missile. Israel has authorised the call-up of 40,000 reservist troops, and threatened to escalate to a ground operation. -thenews