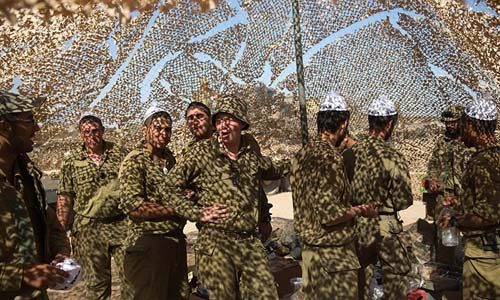 Israel said Tuesday it would weigh an Egyptian truce proposal for Gaza, which has US backing, but Hamas appeared to reject the bid, as the death toll in the week-long conflict rose to 186 Palestinians. The truce proposal came as Egyptian state media reported that US Secretary of State John Kerry was due in Cairo to discuss an end to the hostilities, and after Washington warned Israel against a ground invasion of Gaza.

US President Barack Obama welcomed the Egyptian initiative and described the deaths of Palestinian civilians as a “tragedy” while reiterating that Israel has the right to defend itself against Hamas rocket attacks. “We are encouraged that Egypt has made a proposal to accomplish this goal that we hope can restore the calm that we are seeking,” Obama said at an Iftar dinner marking the Muslim Holy month of Ramadan in the White House. “The pictures that we are seeing in Gaza and in Israel are heart-wrenching,” he added.

Israel’s Operation Protective Edge, intended to stamp out militant rocket fire, had killed 186 people in Gaza by late Monday — exceeding the toll in the last similar flare-up of violence in 2012. Late Monday, Cairo announced a proposal for a ceasefire that would begin Tuesday, saying it was willing to host high-level Israeli and Palestinian delegations for talks after a truce went into effect. “0600 GMT has been set for the beginning of the implementation of truce arrangements between the two sides,” the text of the Egyptian proposal, released late Monday, said.

But that deadline was likely to be delayed, with Israel saying its security cabinet would meet on Tuesday morning to weigh the proposal. And Hamas appeared to reject the idea, with spokesman Fawzi Barhum saying the group would not accept a truce without a fully-fledged deal to end hostilities. “In times of war, you don’t cease fire and then negotiate,” he told AFP. He said Hamas had not received any official proposal, and that even an Israeli cessation of hostilities “on one side” would have “no value” after the damage it has wreaked in Gaza.

Hamas’ armed wing Ezzedine al-Qassam Brigades rejected the truce proposal as “surrender”, saying “our battle with the enemy will intensify.” The Arab League early Tuesday came out in support of the Egyptian initiative calling on “all parties” to accept the truce and also backed a Palestinian demand for “international protection”. Palestinian president Mahmud Abbas, who heads the West Bank-based Palestinian Authority, welcomed the Egyptian initiative, urging the sides to stop firing. -dawn