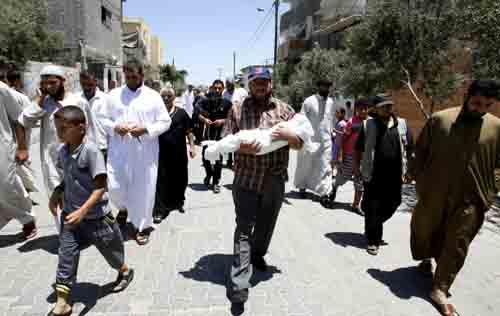 Israel and Hamas have begun observing a five-hour humanitarian cease-fire, as fighting extended into a 10th day. The two sides agreed to the pause following a request by the United Nations so that supplies could be delivered to Gaza. Fighting continued in the lead-up to the start of the cease-fire Thursday.

Police in the southern Gaza town of Rafah said tank shells landed on a house, killing at least three civilians. The Israeli military said 15 rockets were fired into Israel Thursday morning. It also said it prevented an attack by 13 militants who infiltrated into Israel through a tunnel from Gaza. The cross-border fighting has so far killed more than 220 Palestinians and an Israeli, according to officials. -npr