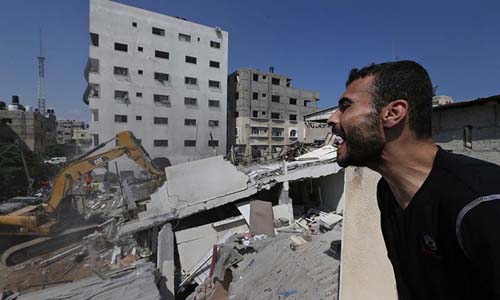 US Secretary of State John Kerry is to push for an “immediate” ceasefire in Gaza when he arrives later Monday in Cairo, President Barack Obama said. Obama also said that while Israel has the right to defend itself against a barrage of Hamas rockets, Washington has “serious concerns about the rising number of Palestinian civilian deaths and the loss of Israeli lives. “

“That is why it now has to be our focus and the focus of the international community to bring about a ceasefire that ends the fighting and that can stop the deaths of innocent civilians, both in Gaza and in Israel,” he said. John Kerry was headed to Egypt, which has been a mediator in past Israel-Palestinian conflicts and has taken the lead in trying to broker a truce between Israel and its foe Hamas, which dominates the Gaza Strip. The two-week conflict has dramatically escalated in recent days, with Israeli ground forces pushing into Gaza, where the Palestinian death toll stood at 570 as of late Monday. Obama noted that Israel had “already done significant damage to Hamas’s terrorist infrastructure in Gaza.

“Eighteen Israeli soldiers have also died, the army’s worst death toll in years. “The work will not be easy,” Obama said of efforts to broker a ceasefire. “Obviously, there are enormous passions involved in this, and some very difficult strategic issues involved,” the president added, in a statement delivered from the White House. “Nevertheless, I’ve asked John to do everything he can to help facilitate a cessation to hostilities. We don’t want to see any more civilians getting killed. “ Earlier, the United Nations demanded an “immediate ceasefire” in Gaza.

As world efforts to end the fighting gathered pace, Israel said it killed 10 Hamas militants in an early morning gun battle after they entered southern Israel through cross-border tunnels. At an urgent meeting on Gaza, the UN Security Council urged an “immediate cessation of hostilities” in a call echoed by US President Barack Obama in a telephone conversation with Israeli Prime Minister Benjamin Netanyahu. With growing concern over the number of civilian deaths, both US Secretary of State John Kerry and UN chief Ban Ki-moon headed to Cairo for ceasefire talks, which have so far been rejected by the Islamist Hamas movement. Following the deadliest day in Gaza in more than five years, in which at least 140 Palestinians were killed, medics pulled another 45 bodies from the rubble early Monday, emergency services spokesman Ashraf al-Qudra said.

And 20 more people were killed in a series of strikes across Gaza. In the latest incident, tank-shelling on a hospital in Deir al-Balah in central Gaza killed five people. And a family of nine was killed in the southern city of Rafah, seven of them children, he said. As the diplomatic efforts gathered steam, hundreds of people could be seen flooding out of the northern town of Beit Hanun, a day after many thousands fled an intensive Israeli bombardment of the eastern district of Shejaiya. On Sunday, at least 72 people were killed in Shejaiya during a punishing Israeli operation which reduced much of the district to rubble and left charred bodies lying in the streets.