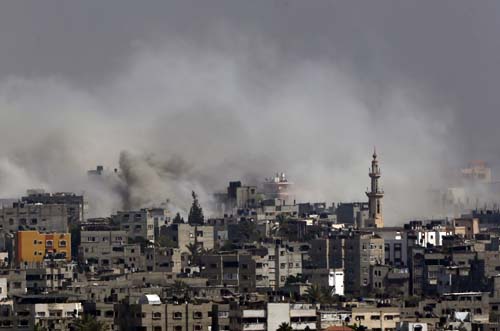 Hamas have been effective in successfully curbing the Israeli might. Their bravery has brought forth dividends, as the Israeli forces have begun to feel the strength of the Hamas moves.

In this regard, US Secretary of State John Kerry has called on the Palestinian group, Hamas, to accept a ceasefire along the lines of an Egyptian proposal, to end the raging Gaza conflict that has already killed at least 635 Palestinians and 31 Israelis. The top US diplomat spoke in Cairo on Tuesday after meeting Egyptian President Abdel Fattah el-Sisi, whose government offered the ceasefire proposal last week. The Palestinian leadership has proposed to Egypt a plan for a ceasefire to be followed by five days of negotiations to stop the fighting, Palestinian official Azzam al-Ahmed told reporters in Cairo on Tuesday.

Kerry’s call comes as United Nations chief Ban Ki-moon met with Israeli Prime Minister Benjamin Netanyahu in Tel Aviv to discuss how to stop the ongoing bloodshed and begin negotiating. “My message is the same for Israelis and Palestinians: Stop fighting, start talking and take on the root causes of the conflict so that we are not at the same situation in the next six months or a year,” he said. In response, Netanyahu said: “We will do what we need to do to defend ourselves”. The Israeli prime minister said that the international community must hold Hamas accountable for consistently rejecting multiple ceasefire proposals.

For Hamas, the root cause is the siege of Gaza, and it has consistently demanded that Israel and Egypt lift the blockade. It also wants the release of dozens of prisoners who were freed in a 2011 swap for captured Israeli soldier Gilad Shalit but re-arrested this summer. “The conditions for a ceasefire are … a full lifting of the blockade and then the release of those recently detained in the West Bank,” its leader in Gaza, Ismail Haniya, said on television. “We cannot go backwards, to a slow death,” he said, referring to the Israeli blockade in force since 2006. The flurry of diplomatic activities also comes as Israeli military reported that one of its soldiers is missing in Gaza and is presumed dead.

Meanwhile, several international airlines have suspended flights to Tel Aviv after a rocket attack near the airport. The airlines were out ahead of aviation regulators in stopping service, with the US Federal Aviation Administration imposing a 24-hour ban on flights to Israel after US airlines acted. Germany’s Lufthansa, Italian airline Alitalia and Air France all acted before the European Aviation Safety Agency issued an advisory. Israeli airline El Al maintained its regular flight schedule. -aljazeera